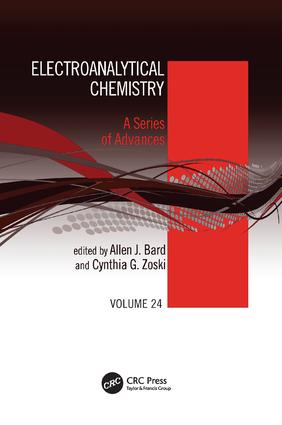 For more than three decades the Electroanalytical Chemistry Series has delivered the most in-depth and critical research related to issues in electrochemistry. Volume 24 continues this gold-standard with practical reviews of recent applications as well as innovative contributions from internationally respected specialists who highlight the emergence of new technologies and trends in the field.

"…[This is] a series which, from its very beginning, proved to be one of the most successful and most frequently cited….The series has shaped the electrochemists of the last thirty years and, even more remarkably, each volume has turned out to be of lasting significance and influence."

Application of SECM to Corrosion Studies, Mark B. Jensen and Dennis E. Tallman

Surface Interrogation Mode of Scanning Electrochemical Microscopy (SI-SECM): An Approach to the Study of Adsorption and (Electro)Catalysis at Electrodes, Joaquín Rodríguez-López

ALLEN J. BARD is Professor and Hackerman-Welch Regents Chair in Chemistry at the University of Texas at Austin, where he has taught since 1958. The author or coauthor of several books and over 800 papers and over 23 patents, Dr. Bard was editor-in-chief of the Journal of the American Chemical Society, and editor or coeditor of Standard Potentials in Aqueous Solution (Marcel Dekker, Inc.), the multivolume Electroanalytical Chemistry series (Marcel Dekker, Inc.), the Encyclopedia of Electrochemistry of the Elements (Marcel Dekker, Inc.), and Electrochemical Methods (with Larry R. Faulkner). He was elected to the National Academy of Sciences in 1982 and is past president of the International Union of Pure and Applied Chemistry. Dr. Bard received the B.S. degree (1955) from the City College of New York, New York, and the M.A. (1956) and Ph.D. (1958) degrees from Harvard University, Cambridge, Massachusetts.

He has received a number of awards, including the Palladium medal of the ECS, the Priestly medal of the ACS, the Welch award and the Wolf prize.

CYNTHIA G. ZOSKI is Professor in the Department of Chemistry and Biochemistry at New Mexico State University. Her research interests include electroanalytical chemistry, ultramicroelectrodes, scanning electrochemical microscopy (SECM), electrocatalysis, and sensors based on micro- and nanoelectrode arrays. Dr. Zoski is the coauthor of Electrochemical Methods: Instructor’s Solution Manual (with Johna Leddy, Wiley, 2001) and Electrochemical Methods: Student’s Solution Manual (with Johna Leddy, Wiley 2002), editor of the Handbook of Electrochemistry (Elsevier, 2007), and author or co-author of over 60 papers and book chapters. Dr. Zoski received the B.S. (1976) degree from Lehigh University, Pennsylvania, M.Sc. (1979) from Trent University, Canada, and Ph.D. (1985) from Queen’s University, Canada.

Electroanalytical Chemistry: A Series of Advances