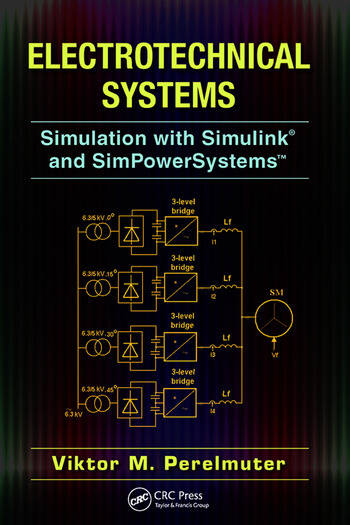 Build from Circuit Elements and Blocks to System Models

Building from simple to more complex topics, the book helps readers better understand the principles, features, and detailed functions of various electrical systems, such as electrical drives, power electronics, and systems for production and distribution of electrical energy. The text begins by describing the models of the main circuit elements, which are used to create the full system model, and the measuring and control blocks. It then examines models of semiconductor devices used in power electronics as well as models of DC and AC motors. The final chapter discusses the simulation of power production and transmission systems, including hydraulic turbine, steam turbine, wind, and diesel generators. The author also develops models of systems that improve the quality of electrical energy, such as active filters and various types of static compensators.

A companion CD supplies nearly 100 models of electrotechnical systems created using SimPowerSystems. These encompass adaptations of SimPowerSystems demonstrational models, as well as models developed by the author, including many important applications related to power electronics and electrical drives, which are not covered by the demonstrational models. In addition to showing how the models can be used, he supplies the theoretical background for each. Offering a solid understanding of how electrical systems function, this book guides readers to use SimPowerSystems to create and investigate electrical systems, including those under development, more effectively.

Viktor M. Perelmuter has been working as a scientific advisor at the National Technical University’s Kharkov Polytechnic Institute and at the Research Electrotechnical Institute, Kharkov, Ukraine, since 2001. He is also a member of the IEEE. Along with his engineering activities, Perelmuter headed scientific work in the fields of electrical drives, power electronics, and control systems. He is the author or coauthor of nine books and more than 70 articles. He also holds 19 patents in the former USSR and Ukraine.

"Currently, no text book is available in this area. … of immense help to the students, researchers, and practicing engineers for simulation of these systems. … a comprehensive treatment of the subject … The book will be extremely valuable to the entire electrical engineering community"
—Dr. Bimal K. Bose, Life Fellow, IEEE, University of Tennessee, Knoxville