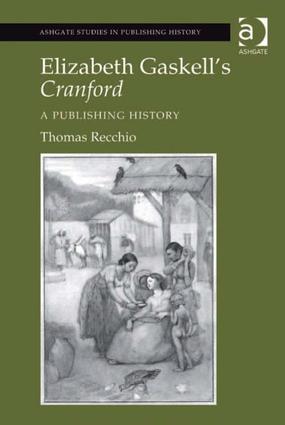 Tracing the publishing history of Elizabeth Gaskell's Cranford from its initial 1851-53 serialization in Dickens's Household Words through its numerous editions and adaptations, Thomas Recchio focuses especially on how the text has been deployed to support ideas related to nation and national identity. Recchio maps Cranford's nineteenth-century reception in Britain and the United States through illustrated editions in England dating from 1864 and their subsequent re-publication in the United States, US school editions in the first two decades of the twentieth century, dramatic adaptations from 1899 to 2007, and Anglo-American literary criticism in the latter half of the twentieth century. Making extensive use of primary materials, Recchio considers Cranford within the context of the Victorian periodical press, contemporary reviews, theories of text and word relationships in illustrated books, community theater, and digital media. In addition to being a detailed publishing history that emphasizes the material forms of the book and its adaptations, Recchio's book is a narrative of Cranford's evolution from an auto-ethnography of a receding mid-Victorian English way of life to a novel that was deployed as a maternal model to define an American sensibility for early twentieth-century Mediterranean and Eastern European immigrants. While focusing on one novel, Recchio offers a convincing micro-history of the way English literature was positioned in England and the United States to support an Anglo-centric cultural project, to resist the emergence of multicultural societies, and to ensure an unchanging notion of a stable English culture on both sides of the Atlantic.

'Thoroughly researched in every respect, this is an illuminating response to a long familiar text. It considers questions of illustration, the multiplicity of editions on both sides of the Atlantic, together with its dramatic and televisual adaptation, and conducts a detailed and revealing analysis of the implications of Cranford’s iconic significance.' Alan Shelston, University of Manchester, UK and President, The Gaskell Society ’This is an auspicious beginning to the "Ashgate Studies in Publishing History" series… Recchio writes with inviting clarity, providing not only the advertised publishing history of the novel […] but also analyses of the social conditions that brought about changes in the text and, especially, packaging of the novel… Highly recommended.' Choice ’Recchio deals with Cranford's move onto stage and screen in an original, interesting and interdisciplinary manner.’ Times Literary Supplement 'Thomas Recchio's study of Cranford issued as part of Ashgate's series Studies in Publishing History, is more than a mere bibliographic record or even a simple publishing history… Thomas Recchio's book was published simultaneously in hardback and in a kindle version… It is exciting that Gaskell literary scholarship has joined the cutting edge publishing format.' Gaskell Journal ’… [Recchio] provides us with some intriguing readings and proves to be a deft interpreter of image-text relations… It is difficult to convey the rich detail of Recchio’s engaging account in such short space… Recchio’s study will be of central interest to Gaskell scholars and will also be useful for critics wishing to consider the ways in which illustration and adaption can be related to the reception history of literary texts.’ English Studies 'Recchio’s publishing history […] is interesting on several counts: as a material history of cultural publication, as an interpretation of the Cranford text that benefits from a number of interrogativ

Thomas Recchio is associate professor of English at the University of Connecticut, USA