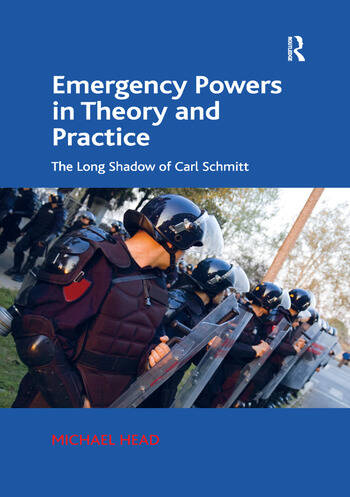 Emergency Powers in Theory and Practice: The Long Shadow of Carl Schmitt

Why have the early years of the 21st century seen increasing use of emergency-type powers or claims of supra-legal executive authority, particularly by the Western countries regarded as the world's leading democracies, notably the United States? This book examines the extraordinary range of executive and prerogative powers, emergency legislation, martial law provisos and indemnities in countries with English-derived legal systems, primarily the UK, the US and Australia. The author challenges attempts by legal and academic theorists to relativise, rationalise, legitimise or propose supposedly safe limits for the use of emergency powers, especially since the September 2001 terrorist attacks. This volume also considers why the reputation of Carl Schmitt, the best-known champion of 'exceptional' dictatorial powers during the post-1919 Weimer Republic in Germany, and who later enthusiastically served and sanctified the Nazi dictatorship, is being rehabilitated, and examines why his totalitarian doctrines are thought to be of relevance to modern society. This diverse book will be of importance to politicians, the media, the legal profession, as well as academics and students of law, humanities and politics.

Michael Head is Professor of Law, University of Western Sydney, Australia. He has published a substantial range of books and refereed articles relating to public law, legal theory and civil liberties.

"Michael Head has written a powerful and persuasive account of the permanent emergency laws to be found in 'liberal democracies'. A perfect antidote to the naivety of the human rights lobby, this sobering and important book ought to be widely read." - Keith Ewing, Kings College London, UK

"Crisis and emergency have become contemporary preoccupations. Since 9/11 especially, our polities have been increasingly securitised through dread of existential risks ranging from terrorism to climate change. This book expertly alerts us to challenge the growing banality of emergency laws and the past and present theories of 'exceptionality' supporting them." - Clive Walker, University of Leeds, UK

"Here finally is a critique of Carl Schmitt that does not separate the man from his ideas; in the state of permanent emergency we find ourselves in today, all working in this field need to expose themselves to the robust rebuttal that Michael Head so eloquently provides." - Conor Gearty, London School of Economics, UK

"When the Australian Government and Parliament in 1951 tried to ban the Communist Party the High Court of Australia, led by Justice Owen Dixon, held that the law was unconstitutional. Dixon specifically warned that history, and not just ancient history, taught of the excesses to which executive government and its officials were prone in their responses to suggested dangers. Drawing on the experience of Nazi Germany's excesses, Professor Head points to the erroneous theories of Carl Schmitt. This is a timely study which reminds us to remember Dixon, when advocates of exceptionalism capture the ears of government. And never to forget what happens when followers of Schmitt's philosophy get the upper hand." - The Hon. Michael Kirby AC CMG, Former Justice of the High Court of Australia and Chair of the UN Commission of Inquiry on North Korea