Emerging Powers in International Politics
The BRICS and Soft Power 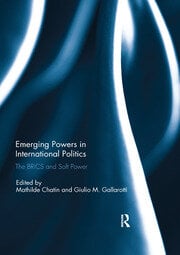 Emerging Powers in International Politics: The BRICS and Soft Power

The rise of large and rapidly growing nations is having a significant impact on the global order, as their expanding influence reshapes the structure of power in the international system. These emerging powers are increasingly asserting themselves as major actors on the global scene. Leading this cadre of emerging powers are five nations referred to as the BRICS – Brazil, Russia, India, China and South Africa. This book takes inventory of both the individual and collective soft power of this rising bloc of nations. Having embraced the potential of this newly emphasized type of power as a means of generating international influence, these nations have dedicated substantial effort and resources to implementing a soft power offensive.

This book was originally published as a special issue of the Journal of Political Power.

Mathilde Chatin is a PhD candidate in the Brazil Institute at King’s College London, UK. She has been a fellow at the BRICS Policy Center in Rio de Janeiro, and a visiting scholar in the Department of International Relations at the University of São Paulo, Brazil.

is a Professor of Government and Tutor in the College of Social Studies at Wesleyan University, USA. He has also been a visiting professor in the Department of Economic Theory at the University of Rome, Italy. He is the author of The Power Curse: Influence and Illusion in World Politics (2010) and Cosmopolitan Power in International Relations: A Synthesis of Realism, Neoliberalism, and Constructivism (2010).

The authors successfully shed light on the soft power strategies of the BRICS across many issue areas, and seriously explore opportunities and challenges generated by soft power when driving the BRICS’ international behaviour. This valuable contribution is an essential reading to any scholar or policymaker interested in the BRICS and soft power, and those seeking to understand the contemporary international landscape in which emerging powers are now important players with increasing influence. – Celso Amorim, Former Brazilian Minister of Foreign Affairs (1993-1994 and 2003-2010) and Defence (2011-2014); Chair of UNITAID's Executive Board

It is usually the case that most discussion of the rise of the BRICS focuses on their economic performance. While their economic might, or lack of, forms the basis of their global influence, my original creation of the concept was based on the need for the BRIC countries to play a more central role in global governance. In this regard, this book is highly welcome, providing a detailed analysis of the role of soft power in each of the BRICS countries and their collective soft power. As I have articulated, as of yet, the BRICS group has not fully demonstrated an effective collective purpose and has scope to have a major influence on shared challenges, including global ones. This useful analysis demonstrates that there is the scope for plenty more to come. – Jim O’Neill, Former Goldman Sachs Chief Economist and Treasury Minister

This valuable collection of essays brings the concept of soft power to bear on important issues in world politics.  It will be of interest to scholars and policy makers alike. – David Baldwin, Senior Political Scientist, Woodrow Wilson School of Public and International Affairs, Princeton University, USA

Emerging Powers in International Politics – first published as a special issue of the Journal of Political Power in October 2016 – adds significant depth to the discussion on the role of the BRICS in international politics, both as individual states and as a multilateral body. The volume also generates new insights on evolving perceptions of soft power – though its analysis has, in parts, been overtaken by events, such as the rise of a rightist government in Brazil and the further erosion of Russia’s reputation following, for instance, charges of state-sponsored ‘doping’ among the Russian Olympic team. - Martha Bridgman, South African Institute of International Affairs