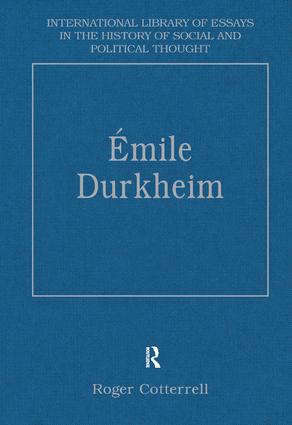 This volume focuses on three closely-connected aspects of Ã‰mile Durkheim's work: his sociology of justice, his sociology of morality and his political sociology. These areas of his thought are the most relevant and practical today in considering fundamental problems of contemporary societies and they provide many of the richest and most important insights of his social theory. Yet they are also relatively neglected and this volume collects together the most incisive recent periodical commentary on them. Within the justice-morality-politics triangle, Durkheim examines moral pluralism and the possibility of identifying a unifying value system for complex societies; the nature and conditions of democracy; the relations of the citizen, the state and corporate groups; criteria of justice and of effective economic regulation; and modern individualism with its associated ideas of human dignity and human rights. This tightly-integrated volume presents Durkheim's thought in an unusual and revealing light, showing him as a key social and political thinker for the twenty-first century.