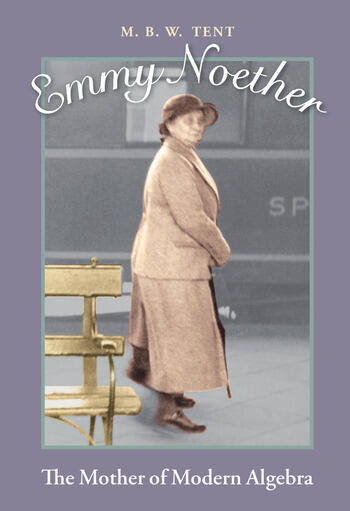 This book, written primarily for the young adult reader, tells the life story of Emmy Noether, the most important female mathematician of our time. Because no one expected her to grow into an important scientist, the records of her early life are sketchy. After all, it was assumed that she would grow up to be a wife and mother. Instead, she was a genius who chose a distinctive path. The author has woven this charming story of Emmy Noether’s life around the events that appear in the oral and written records, fleshing out the story with details about life in Germany at the time and what we know about how bright children explore mathematics.

book paints a picture of one of the most fascinating figures of 20th century mathematics, Emmy Noether. Her great accomplishments filled her life with meaning and happiness, even though she lacked some of the attributes usually considered part of a gratifying life: marriage, a family, and wealth. But mathematics and disciples sufficed for her.
—Peter Lax, Peter Lax, Recipient of the 2005 Abel Prize, May 2008

appealing to teenage girls that a homely girl finds fame and happiness not with Prince Charming but with making brand new mathematics about rings and fields, the bricks and mortar of a new area of mathematics, modern algebra.
—Cathleen Morawetz, Courant Institute of Mathematical Sciences, NYU, May 2008

This book is an excellent biography of the premier female mathematician of the twentieth century. . . . the author engages in a great deal of 'literary creativity' in generating the supposed dialog between Emmy and her parents, siblings, students and coworkers. None of it is beyond the bounds of plausible conversation, and she is presented as a woman of substance who cared little for the trappings of style and pomp.
—Charles Ashbacher, MAA Online, November 2008

The author's devotion to the subject---visits to Erangen and Goettingen, and interviews with authorities on Noether's life and work---shows through in a way that should appeal to the target readership.
—Albert Lewis, Mathematical Reviews, June 2009

The author has produced a very clear pen-portrait that emphasises the main elements of Emmy Noether’s life and career. She makes clear in an immensely civilised (and almost understated) style how her severe disabilities – being a woman in a chauvinistic men’s world, being of Jewish family in an antisemitic world – were, for her, of no real consequence. . . . The story-telling is sympathetic, graphic and convincing. The book is written by an enthusiastic mathematics teacher with, it seems, her Alabama high-school pupils in mind . . . but it will be read with pleasure and profit by anyone, of any age, who loves mathematics, and it should be given by those who do to those who don’t. You should buy this book and give it as a present to children, their parents and grandparents, their uncles and aunts – but most especially to anyone who might ever have thought or said 'maths is not for girls'.
—Peter M. Neumann, The London Mathematical Society Newsletter, April 2009

This is a very nice little biography of Emmy Noether. The American author did a lot of rigorous inquiries and careful investigations, and [she] even stayed for some time in Germany. ... A lot of interesting pictures are included, ... it is worth reading this biography of the outstanding female mathematician — The Mother of Modern Algebra — for mathematicians and non mathematicians.
—G. Kirlinger, International Mathematical News, August 2009

This book is devoted to the life of one of the most fascinating and influential figures of modern mathematics...who is well-known in particular for her excellent results in modern algebra (the theory of rings and fields), for her teaching activities and her collaboration with many outstanding scientists (e.g. with Albert Einstein).
—EMS Newsletter, March 2009