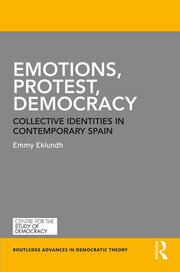 With the rise of both populist parties and social movements in Europe, the role of emotions in politics has once again become key to political debates, and particularly in the Spanish case. Since 2011, the Spanish political landscape has been redrawn. What started as the Indignados movement has now transformed into the party Podemos, which claims to address important deficits in popular representation. By creating space for emotions, the movement and the party have made this a key feature of their political subjectivity. Emotions and affect, however, are often viewed as either purely instrumental to political goals or completely detached from ‘real’ politics. This book argues that the hierarchy between the rational and the emotional works to sediment exclusionary practices in politics, deeming some forms of political expressions more worthy than others.

Using radical theories of democracy, Emmy Eklundh masterfully tackles this problem and constructs an analytical framework based on the concept of visceral ties, which sees emotions and affect as constitutive of any collective identity. She later demonstrates empirically, using both ethnographic method and social media analysis, how the movement Indignados is different from the political party Podemos with regards to emotions and affect, but that both are suffering from a broader devaluation of emotional expressions in political life.

Bridging social and political theory, Emotions, Protest, Democracy: Collective Identities in Contemporary Spain provides one of the few in-depth accounts of the transition from the movement Indignados to party Podemos, and the role of emotions in contemporary Spanish and European politics.

Introduction: A Narrative of Three Crises

1. Emotion and Reason in Collective Action

3. The Contribution of Radical Democracy

6. From Movement to Party

Conclusion: Addressing the Crisis of Subjectivity

Emmy Eklundh is a Lecturer in Spanish and International Politics at King’s College London. Her research is mainly centred on the post-crisis eruptions of protest in Southern Europe and challenges to the European democratic order. Current research projects include the rise (or return) of left- and right-wing populist movements and parties in Europe.

"This is a significant new monograph, arguably the first of its kind, focusing on issues that are not only extremely topical like populism, but are also researched from innovative perspectives combining the discursive and the affective in a truly original way. This is a work of high academic standard, advancing innovative perspectives, and it promises to shape decisively on-going debates. Not to be missed!" —Yannis Stavrakakis, Aristotle University of Thessaloniki, Greece

"This necessary book develops a creative and original framework to conceptualize affects and emotions as essential elements to understand politics and democracy. Emmy Eklundh convincingly overcomes dichotomies such as rational and emotional, vertical and horizontal, as well as language and practices. Based on the cases of the indignados movement and Podemos, the book proves, empirically and theoretically, that emotions, far from being a risk belonging to the irrational masses, are the core of politics and the articulation of political subjects. Although grounded in the Spanish context, this book is highly recommendable to all those interested in democracy theory, social movements, new political parties, collective identities, political communication and discourse theory." — Óscar García Agustín, Aalborg University, Denmark

"Emotions, Protest, Democracy: Collective Identities in Contemporary Spain is a significant and absolutely necessary contribution in the field of collective action, contemporary movements and democratic theory. Rather than searching for ‘rationalist’ explanations, focusing either on the economic factors and/or the malfunctions of a democratic framework underpinned by the idea of rational consensus, the book moves further, exploring the role of affect in the constitution of political subjectivity. Contra contemporary academic and journalistic accounts afraid of engaging seriously with the role of emotions/affect in political life, this holistic ethnographic work on the Spanish Indignados, examines the processes of creating unity through disunity, disagreement and affect. The final chapter is itself a significant contribution in political theory." —Marina Prentoulis, University of East Anglia

"[The book] operates in the tension between understanding and accepting emotional political subjects, the book offers many valuable ideas to those who wish to engage in the struggle for recognition on their behalf. At the same time, these ideas – especially the conception of visceral ties – significantly further our understanding of how the emotional political subjects are formed." —Andrei Bespalov, Contemporary Political Theory