Empire, Technology and Seapower
Royal Navy crisis in the age of Palmerston 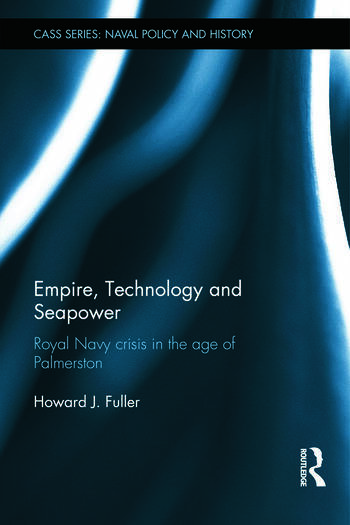 Empire, Technology and Seapower: Royal Navy crisis in the age of Palmerston

This book examines British naval diplomacy from the end of the Crimean War to the American Civil War, showing how the mid-Victorian Royal Navy suffered serious challenges during the period.

Many recent works have attempted to depict the mid-Victorian Royal Navy as all-powerful, innovative, and even self-assured. In contrast, this work argues that it suffered serious challenges in the form of expanding imperial commitments, national security concerns, precarious diplomatic relations with European Powers and the United States, and technological advancements associated with the armoured warship at the height of the so-called 'Pax Britannica'.

Utilising a wealth of international archival sources, this volume explores the introduction of the monitor form of ironclad during the American Civil War, which deliberately forfeited long-range power-projection for local, coastal command of the sea. It looks at the ways in which the Royal Navy responded to this new technology and uses a wealth of international primary and secondary sources to ascertain how decision-making at Whitehall affected that at Westminster. The result is a better-balanced understanding of Palmerstonian diplomacy from the end of the Crimean War to the American Civil War, the early evolution of the modern capital ship (including the catastrophic loss of the experimental sail-and-turret ironclad H.M.S. Captain), naval power-projection, and the nature of 'empire', 'technology', and 'seapower'.

This book will be of great interest to all students of the Royal Navy, and of maritime and strategic studies in general.

Introduction  Part I: Palmerstonian ‘Gunboat Diplomacy’, Ironclad Technology and the ‘Declinist’ Controversy  1: The edge of naval defence  2: British decline  3: Peace-making  4: ‘Rule Britannia'  5: True, because it did not happen  6: Breastworks  7: Monitors for coastal assault  8: ‘Shock and Awe’  Part II: From the Crimean War to the American Civil War: Naval Innovation and the Anglo-French Balance of Power  9: "Naval architecture, to a great extent, must remain sheer empiricism"  10: "It is impossible now for this country to rely entirely for its defence upon its naval means"  11: "The British Lion must put his tail between his legs, and ‘Civis Romanus’ give up swaggering so loftily"  12: "They may hope for a fair share of success in at least the outbreak of hostilities"  13: "To increase his naval means, evidently for offensive as well as for defensive Purposes"  14: "If by a Stroke of the wand I could effect in the Map of the world the Changes which I could wish"  15: "The policy of substituting ships protected by heavy iron plates need not enter into the consideration"  16: "We are too rich, too industrious, too dependent on other nations, to face indifferently the prospect of a blockade"  17: "We have found a way of making men-of-war shot proof"  18: "Give us in the shortest Time good means of Defence at Home"  19: "The means by which we shall again be able to catch the bird in his own net" 20: "Not as the wisest, nor as the most economical, nor as the safest way of meeting the exigencies of the case"  Part III: ‘Splendid Isolation’, the ‘Cherbourg Strategy’ and the ‘Great Armament’ Reconsidered  21: ‘Splendid Isolation’: a matter of choice?'  22: Cherbourg  23: Cronstadt  24: The ‘Great Armament'  25: The edge of naval offence  26: ’twixt sea and shore  Part IV: Iron Lion or Paper Tiger? The Myth of British Naval Intervention in the American Civil War  27: "The dissolution of the Union will prove good to the world, to Great Britain, and probably in the end to America herself"  28: "We shall soon iron the smile out of their face"  29: "Is the Warrior itself a match for the Monitor? It is useless now to talk of speed and magnificence"  30: "The peril of committing the honour of this country to the assumption of an attitude, which it may be unable or unwilling permanently to maintain"  Conclusion

Howard J. Fuller is Senior Lecturer of War Studies at the University of Wolverhampton (UK), Associate Editor for the International Journal of Naval History and the author of Clad in Iron: The American Civil War and the Challenge of British Naval Power (2007).

'Regardless of which side of this historiographic debate readers ultimately choose, Fuller's work pushes scholars to continue to reevaluate our understanding of technology and its ramifications on naval strategy and foreign policy.' -- The Journal of Military History

'Regardless of which side of this historiographic debate readers ultimately choose, Fuller's work pushes scholars to continue to reevaluate our understanding of technology and its ramifications on naval strategy and foreign policy.' -- The Journal of Military History

'...Fuller successfully combines an analysis of innovation and change in naval hardware with a wide-ranging and detailed account of the politics of naval supremacy.' -- Professor Miles Taylor, University of York , The Mariner’s Mirror

'Howard Fuller...offers a fresh examination of the mid-nineteenth century Royal Navy in a study that synthesizes the interplay of technology, naval strategy and party politics as played out in the era of Viscount Palmerston, British prime minister between 1855-58 and 1859-65. This reviewer…has no reservations in recommending the work. Historians will appreciate a succinct recounting of the transition from sail to steam and its place in broader British affairs.' -- Dr. Joseph Moretz, British Commission for Military History,  International Journal of Naval History