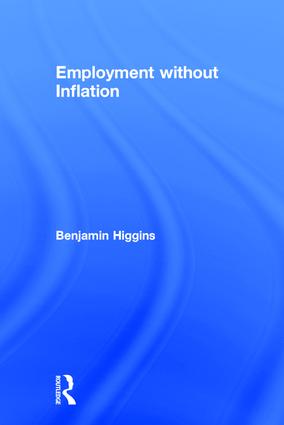 The world economy has undergone a fundamental transformation in recent decades and theoretical structures inherited from the 1930s through the 1950s, while retaining large elements of truth, are inadequate to deal with current problems. Benjamin Higgins feels that for a society such as the United States a fiscal policy needs to be adopted that can deal simultaneously with existing unemployment and inflation. He suggests three possible governmental policies: stimulating a high rate of long-run growth, by use of reward innovations and by maintaining the highest possible level of scientific and technical activity; isolating regions that are generators of inflation and others that are pools for unemployment; and establishing a system of direct controls similar to those used in wartime. Higgins describes the transformation of the cogent prewar business cycle, with its alternations of inflation or unemployment, then a transitional period of underemployment equilibrium and secular stagnation, and finally, the strange new world of today, one with economic fluctuations in the form of shifting trade-off curves and loops. He then applies his new paradigm to current problems, showing why they cannot be managed through macroeconomic monetary and fiscal policy. Higgins offers case studies of efforts to fight inflation and unemployment, and to reduce regional gaps, to show their strengths and weaknesses. It can be said that unemployment always results from too many people chasing too few jobs, and inflation is always caused by too much money chasing too few goods and services. Beyond such banal generalizations, Higgins maintains there is no single cause for either unemployment or inflation, and thus no single cure can be prescribed for either, let alone for both at once. Nor is it to be expected that the appropriate cure will prove to be the same in all countries at all times. He suggests that an optimal blend of monetary and fiscal policy that will produce the "minimum discomfort" is a good start. Employment Without Inflation will be of direct policy interest to economists, sociologists, and national planners.