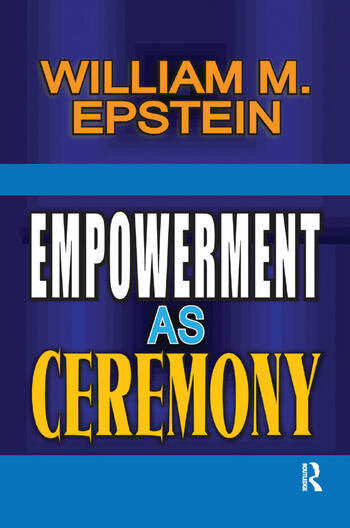 Many people in the United States are poor, lead marginal lives, and need jobs as well as basic services such as education, medical care, and housing. Multitudes in other parts of the world, in addition to being poor, are jailed, tortured, and killed for being members of the wrong ethnic group or expressing political opinions. Those who argue for empowerment claim it is a magic bullet. It can liberate the oppressed, largely through self-organization, self-motivation, self-invention, and even self-clarity.

William M. Epstein sees contemporary empowerment practice in the United States as a civic church of national values, one better in performing its ceremonial role than god-based houses of worship. By itself, empowerment is not worth the effort of commentary, since it achieves none of its goals and has not even generated a respectable critical literature. But Epstein argues that empowerment practice and American social welfare both embody prescriptive cultural preferences. Like art and music, empowerment opens windows into deeper social meaning.

The social sciences have carved out roles for themselves by looking for simple remedies, ones that are inexpensive and compatible with contemporary social arrangements. Epstein shows that those in social work practices have not only deluded themselves into thinking that these services have real instrumental value, but really operate at cross-purposes. This accessible work will attract critical attention among these professional groups. It bases its carefully-documented insights upon informed sociological and anthropological theory.