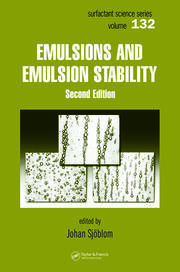 Emulsions and Emulsion Stability, Second Edition provides comprehensive coverage of both theoretical and practical aspects of emulsions. The book presents fundamental concepts and processes in emulsified systems, such as flocculation, coalescence, stability, precipitation, deposition, and the evolution of droplet size distribution.

The book explains how to predict emulsion stability and determine droplet sizes in a variety of emulsion systems. It discusses spontaneous emulsification and the formation of “nanoemulsions” as well as droplet-droplet interactions in different electrical fields (electrocoalescence), and the formulation, composition, and preparation variables that contribute to the inversion in emulsion systems. Several chapters emphasize applications such as emulsification encountered in oil spills, asphalt, chemical flooding, acid crude oils, and large-scale industrial wastewater treatment. The survey of experimental characterization methods highlights the importance of thin liquid films in colloidal systems and assesses different NMR applications, ultrasound characterization, video microscopy, and other on-line instrumentation. The last chapter in the book deals with obtaining conductivity measurements as an alternative to online instrumentation.

Completely revised and expanded, this second edition of Emulsions and Emulsion Stability offers a well-rounded collection of knowledge that is applicable to all academic and industrial scientists and researchers in the fields of surfactant and emulsion science.