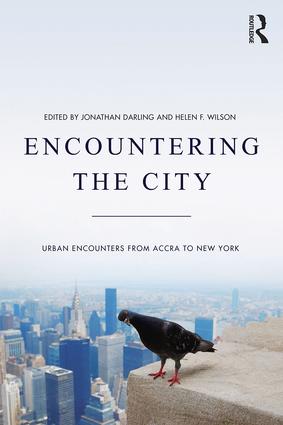 Encountering the City provides a new and sustained engagement with the concept of encounter. Drawing on cutting-edge theoretical work, classic writings on the city and rich empirical examples, this volume demonstrates why encounters are significant to urban studies, politically, philosophically and analytically. Bringing together a range of interests, from urban multiculture, systems of economic regulation, security and suspicion, to more-than-human geographies, soundscapes and spiritual experience, Encountering the City argues for a more nuanced understanding of how the concept of 'encounter' is used. This interdisciplinary collection thus provides an insight into how scholars' writing on and in the city mobilise, theorise and challenge the concept of encounter through empirical cases taken from Africa, Asia, Australia, Europe, North America and South America. These cases go beyond conventional accounts of urban conviviality, to demonstrate how encounters destabilise, rework and produce difference, fold together complex temporalities, materialise power and transform political relations. In doing so, the collection retains a critical eye on the forms of regulation, containment and inequality that shape the taking place of urban encounter. Encountering the City is a valuable resource for students and researchers alike.

’A lively and theoretically insightful collection, with evocative case examples from cities in many corners of the world. If you are interested in a demonstration of how you might use the fashionable concept of encounter to illuminate contemporary urban living, and in knowing what the concept might help you do and what it may not, then this book is a wonderful resource. I especially liked the emphasis on the temporalities that are part of encounters in particular contexts - the way in which elements of the past combine with imaginings of the future to form engagements in the present. Enjoy!’ Ruth Fincher, University of Melbourne, Australia

1. The Possibilities of Encounter

3. From Urban Talent to Commodity City: Encountering Marketplaces in the Informal Economy

6. On the Politics of Vision and Touch: Encountering Fearful and Fearsome Bodies in Cape Town, South Africa

10. Working across Class Difference in Popular Assemblies in Buenos Aires

11. Encountering Suspicion: Preemptive Security and the Urban Field of Suspects

14. Encountering what is (not) there

Jonathan Darling is Senior Lecturer in Human Geography at the University of Manchester, UK, he is an urban and political geographer.

Helen F. Wilson is Lecturer in Human Geography at the University of Manchester, UK, she is a social and cultural geographer.