Encounters with Civilizations
From Alexander the Great to Mother Teresa 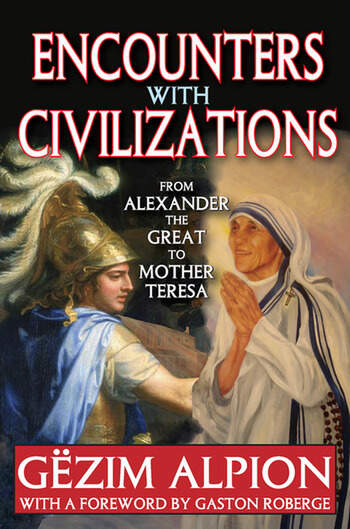 Encounters with Civilizations: From Alexander the Great to Mother Teresa

Encounters with Civilizations is a broad-ranging work, uniting sweeping themes such as history, culture, the media, social issues, and politics. Building around comparative analyses of aspects of Albanian, Egyptian, British, and Indian cultures, Alpion addresses the problems people experience in their encounters with civilizations different from their birth cultures.The course of history has made the confrontation and comingling of different cultures inevitable. It has also engendered ambivalence toward the cultures involved, including a desire to emulate the new culture, or resentment, or conflicting attitudes toward the relative strength or weakness of both birth and new cultures. Alpion describes how Egyptian culture and politics have been shaped by foreign domination while retaining ancient customs at the social level. In comparison, Great Britain has been an imperial power whose cultural preeminence has shaped the images of smaller countries in the eyes of the world. Alpion writes of English images of his native Albania and offers a penetrating analysis of Mother Teresa as a Christian missionary in Hindu and Muslim India, focusing on her cultural presentation via the media and the cult of celebrity.Whether discussing the customs of Egyptian coffee houses or Alexander the Great as a defining figure in Western and Eastern culture, Alpion grasps the impact of these cultural encounters. He makes us aware that understanding and resolving such differences involves considering ultimate issues of life and death.

Gëzim Alpion is Lecturer in Sociology at the University of Birmingham, UK. He received a PhD from the University of Durham, UK, in 1997. His works include Vouchers: A Tragedy (2001), Foreigner Complex: Essays and Fiction About Egypt (2002), Mother Teresa: Saint or Celebrity (2007) and If Only the Dead Could Listen (2008).

Gaston Roberge teaches film and communication at St. Xavier’s College, Calcutta. He has written fifteen books, one of which, Communication Cinema Development (Manohar, 1998), won an award at the National Film Festival in India in 1999.

‘Like all good sociologists Alpion illuminates the core of a society through an analysis of its margins…. Alpion offers us a view of the other that is not embittered or destructive but ultimately positive and challenging.’

‘One of the main theses of the book is that there is, especially in academia, an inbuilt discrimination and injustice against countries outside the First World, and that Albania and other East European nations suffer the same or similar discrimination as West Asian Islamic countries, and the African and Asian continents… The book is therefore a collection of 13 significant sociological and historical articles relaying a voice from the margins that comes from inside the geography at times wrongly considered to be uniformly the "rich world"’.

‘Reminiscent of Durkheim’s writings on strangers in places, Encounters with Civilizations, covers centuries and cultures both past and present…. [Alpion] encourages us to think reflectively and critically about our own beliefs, experiences and understandings, and thus helps to open up the possibility for change and the encounters with "civilizations" (others and our own) that we experience daily, either personally or through the media.’

‘[Encounters with Civilizations] deals with history, culture, the media, social issues and politics…[and] is prompted by Dr Alpion’s ongoing reflection on the problems people experience in their encounters with civilizations different from theirs. Thus, these texts pertain to philosophy…. One may not always agree with Dr Alpion’s opinions, but one can never discard them. One is challenged, whatever the place one happens to live in.’

‘Alpion looks very insightfully into the ways in which so many, particularly those of religious and political groups and the media, have distorted the life and work of Mother Teresa, not least Malcolm Muggeridge in his "discovery" of her in l968.’

‘Two important behavioural traits appear throughout the book and the author has taken considerable pains to weave the manifestations of these traits in each of the locales presented in the book. These are ‘foreigner complex’ and ‘social closure’.... The book has important messages for those wishing to seek their futures on foreign soil.’

Head of Department of Political Science, University of Calcutta

‘Globalization has brought an increased awareness of the interconnectedness of cultures, while a historical awareness shows the hubris involved in any presumption of a privileged centre. Dr Gëzim Alpion is the ideal companion in travels across and within cultures. He brings a sensitive humanism and the eye of an acute scholar to address diverse issues of cross-cultural understanding in divided worlds. These essays will be necessary reading.’

‘This book provides further proof that Professor Gëzim Alpion is one of the most intelligent and acute observers in the world of the situation of Albanian culture and its most famous modern representative, Mother Teresa. His work is destined to be controversial but should be read as widely as possible, and his book Mother Teresa: Saint or Celebrity? will, I believe, prove a standard and indispensable resource.’

‘[Alpion] seeks to do on paper what Mohammed Ali did in politics: release Egypt from the psychosis of its national inferiority complex, restore its nationhood, and revive Egypt for the Egyptians. And in Foreigner Complex he comes closer to depicting the essence of five thousand years of Egyptian identity than a thousand newspaper despatches from Cairo.’

‘The author does take up certain controversial issues in the book. The volume argues for cross-cultural understanding and co-existence of civilizations. It gives the message to people across civilizations to embrace the "other" without prejudice.’