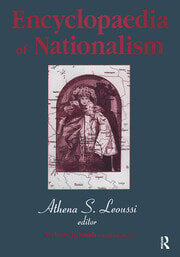 Since the end of the internationalist Soviet experiment in 1989, nationalism is now recognized as a positive, vital force in modern political, cultural, and social life-if kept in check from excess. As a result of the explosion of nationalism, there has been a veritable resurgence of nationalism studies. This proliferation calls for a survey of instruments which have been developed by scholars for the study of nationalism. The Encyclopaedia of Nationalism brings together leading scholars in nationalism studies to survey this complex phenomenon.With over one hundred entries the Encyclopaedia of Nationalism offers a complete and concise set of tools for the study of nationalism in a single volume. The focus throughout is theoretical, and for this reason particular nationalist movements and individual leaders are treated only as illustrative historical and contemporary cases in numerous entries. The Encyclopaedia is organized in an alphabetical sequence of entries, each of which includes a short bibliography for further reading. The reader will find in-depth discussions of the work of modern theoreticians of nationalism.The defining figures of the eighteenth and nineteenth centuries including Herder, Rousseau, Fichte, Marx, and Renan. Conceptual entries, are treated historically and sociologically. Crucial influential ideas and phenomena that continually redefine themselves with changing historical circumstances, among them, anti-Semitism, art and nationalism, assimilation, class and nation, decolonization, ethnic competition, genocide, language and nation, multiculturalism, religion and nation, state and nation, and xenophobia are treated in depth. A special attraction of this volume is its essay-long entries, many of which have been written by the scholars who developed them.The Encyclopaedia of Nationalism discusses in lucid terms, from an interdisciplinary perspective, the central issues, debates, concepts, and theories available to students and scholars of nationalism. As such it is the most comprehensive and authoritative guide to the subject in all its varied manifestations and implications. It will be an essential tool for historians, political scientists, sociologists, and scholars of the history of ideas.