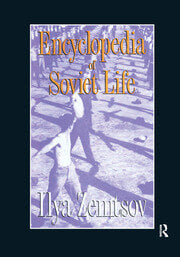 A by-product of the amazing changes now taking place within the Soviet Union is a change in rhetoric no less than reality. Under Gorbachev, the Russian language has been changing parallel with novoe politichaskoe myshenie - new political thinking - with the effect that such new expressions as have flooded the Russian language clash with the less yielding realities of Soviet economy and society.

The purpose of this volume is to clarify this dynamic in Soviet life, in which stagnation and decay confront hopes and expectations for liberalization. Zemtsov argues that the Soviet political language is self-contradictory, fractured into polarities of good and evil and thus depriving the Russian language of its basic subtlety, coherence, and inner logic.

This work brings to life the Orwellian world of double-speak in a post-totalitarian environment. The Soviet language has two basic components: fictions which Communist ideology proclaims as reality, and realities that are portrayed in the guise of fictions. In this sense, Zemtsov undertakes to do for the Soviet language what the great H. L. Mencken achieved for the American language -show the reality of Soviet life by making plain the fictive qualities of Soviet ideology.

This is a basic library reference work, a volume of indispensable utility for political scientists, area experts, and policy analysts. It offers a taxonomy enriched by a deep, personal knowledge of the Russian language by its author. Encyclopedia of Soviet Life is at one and the same time a basic primer of Soviet contemporary politics, a deep portrait of the psychology of totalitarian manipulation, and a sensitive appreciation of the nobler aspirations of the Russian people that is part and parcel of their great language.