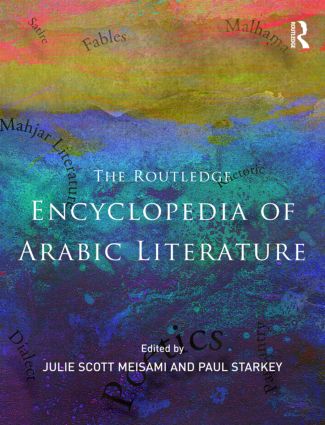 The Encyclopedia of Arabic Literature is an authoritative reference source on the most important authors, works, genres, key terms, concepts and issues in the Arabic literary tradition. The Encyclopedia covers the classical (pre-Islamic to 1258), transitional (1258-1798) and modern periods within a single work. In over 1300 separately-authored entries, many of the world's experts combine current research with traditional study to provide authoritative analysis and commentary on a wide range of areas. These include major authors, important works, and a variety of literary terms. Also covered are forms such as poetry, drama and newspaper writing and key critical concepts of Arabic literature.

'It is a pleasure to welcome a book destined to become a standard source for scholars, students and librarians. Essential for collections in Arabic or Middle Eastern studies and comparative or world literature, and highly recommended for collections serving advanced readers.' - Choice

'A unique and useful reference for the scholar or student … the Encyclopedia has a wide scope from ancient and pre-Islamic times to the present and including not only Muslim writers but Chrisitans, Jews, and others who made significant contributions to Arabic literature. This two volume set … will make an excellent addition to academic or public collections specializing in things Arab or in world literature.' - Library Journal

'This is now the standard reference work for information on the most important authors, works, genres, key terms and issues in the Arabic literary tradition from the classical to the modern period.' - - Religious Studies Review

'The Encyclopedia is a crucial addition to the sources available for students and academics, and it will undoubtedly find its way to the bookshelves of all major libraries around the world' Studia Orientalia 85

Julie Scott Meisami studied Arabic, Persian and Comparative Literature at the University of California at Berkeley. From 1971 to 1980 she lived and taught in Tehran, Iran, and from 1980 to 1985 at Berkeley. Since July 1985 she has been Lecturer in Persian at the University of Oxford. Her research centres on medieval Arabic and Persian poetry and poetics and historiography. She is co-editor of Edebiyât^: The Journal of Middle Eastern Literatures.

Paul Starkey worked as Librarian in the Middle Eastern section at the University of Durham before becoming Lecturer in Arabic there in 1989. His main research interest is in modern Egyptian prose literature; his study of Tawfiq al-Hakim entitled From the Ivory Tower was published in 1988, and he is currently working on a study of the contemporary Egyptian novel. He is a former editor of the British Journal of Middle Eastern Studies.