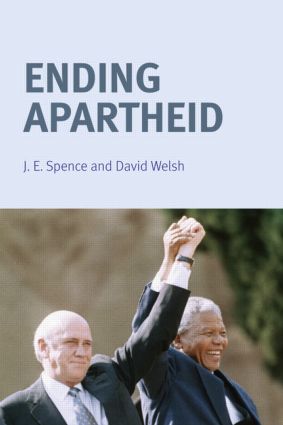 The release of Nelson Mandela from twenty-seven years imprisonment in 1990 and the free elections which followed four years later were among the most dramatic events of the twentieth century.

David Welsh and J. E. Spence here examine the complex forces which lay behind that drama. They chart the rise and decline of apartheid ideology in South Africa, the internal insurrection and increased international isolation which characterised the 1980s and the political roller-coaster ride of the period after 1990 as constitutional negotiations got underway. Based on extensive interviews with those involved, Ending Apartheid traces the negotiating process in penetrating detail, noting the political skills of de Klerk and Mandela in keeping their potentially unruly constituencies in line and avoiding the major violence that many had predicted. Reaching agreement on a democratic constitution was a major achievement that surprised many sceptical observers, but the book ends on a more sombre note. Reviewing the period subsequent to the transition, it argues that while progress has been made, the future of South Africa's democracy is still far from assured.

Written by two eminent scholars with decades of experience teaching in the field, Ending Apartheid is an invaluable resource for all students of South African politics seeking a deeper understanding of a defining episode in recent history.

David Welsh was until 1997 Professor of Southern African Politics at the University of Cape Town, and is currently Professor Extraordinaire in the Department of Political Science at Stellenbosch University. He has published widely on South African issues, and on ethnicity and politics in other divided societies.

J. E. Spence, OBE currently teaches in the Department of War Studies at Kings College, London and is a Senior Visiting Fellow at the UK Defence Academy. He has taught at a number of universities in Britain and abroad and from 1973 to 1991 he was Head of the Department of Politics and Pro-Vice Chancellor at the University of Leicester. He was also a Special Advisor to the House of Commons Foreign Affairs Committee enquiry into South Africa (2003-4).