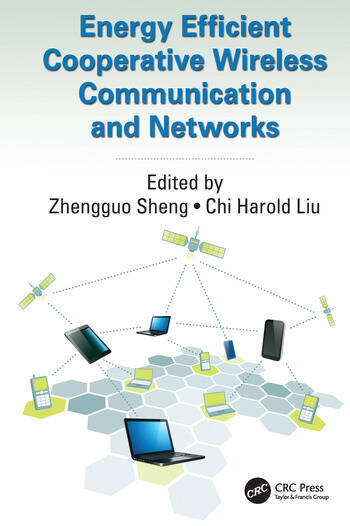 Introducing effective cooperative wireless communication schemes, the book supplies the understanding and methods required to improve energy efficiency, reliability, and end-to-end protocol designs for wireless communication systems. It explains the practical benefits and limitations of cooperative transmissions along with the associated designs of upper-layer protocols, including MAC, routing, and transport protocol.

The book considers power efficiency as a main objective in cooperative communication to ensure quality-of-service (QoS) requirements. It explains how to bring the performance gain at the physical layer up to the network layer and how to allocate network resources dynamically through MAC/scheduling and routing to trade off the performance benefits of given transmissions against network costs.

Because the techniques detailed in each chapter can help readers achieve energy efficiency and reliability in wireless networks, they have the potential to impact a range of industry areas, including wireless communication, wireless sensor networks, and ad hoc networks.

The book includes numerous examples, best practices, and models that capture key issues in real-world applications. Along with algorithms and tips for effective design, the book supplies the understanding you will need to achieve high-performing and energy efficient wireless networks with improved service coverage and reliability.

Zhengguo Sheng is a lecturer at the University of Sussex, UK, and co-founder of WRTnode. His current research interests cover Internet-of-Things, machine-to-machine (M2M), mobile cloud computing, and power line communication (PLC). Previously, he was with the University of British Columbia as a research associate, and with France Telecom Orange Labs as the senior researcher and project manager in M2M and Internet-of-Things, as well as the coordinator of Orange and Asia telco on NFC-SWP partnership. He is also the winner of the Orange Outstanding Researcher Award and CEO Retention bonus recipient, 2012. He also worked as a research intern with IBM T. J. Watson Research Center, USA, and U.S. Army Research Labs. With six years of research experience across industry and academia, Sheng has research interests that cover a wide range in wireless communication from the fundamental information theory to radio technology and protocol design, and so on. Before joining Orange Labs, he received his Ph.D. and M.S. with distinction at Imperial College London in 2011 and 2007, respectively, and his B.Sc. from the University of Electronic Science and Technology of China (UESTC) in 2006.

He has published more than 30 prestigious conference and journal papers. He serves as the technical committee member of ELSEVIER Journals of Computer Communications (COMCOM). He has also served as the co-organizer of IEEE International Symposium on Wireless Vehicular Communications (WiVeC’14), session chair of IEEE VTC’14-Fall, technical program committee members of Tensymp'15, CloudCom'14, SmartComp'14, WCSP'14, Qshine'14, ICCAAD'14, ContextDD'14, etc. He is also a member of the Institute of Electrical and Electronics Engineers (IEEE), Vehicular Technology Society (VTS) and the Association for Computing Machinery (ACM).

is a Full Professor at the School of Software, Beijing Institute of Technology, China. He is also the Director of IBM Mainframe Excellence Center (Beijing), Director of IBM Big Data & Analysis Technology Center, and Director of National Laboratory of Data Intelligence for China Light Industry. He holds a Ph.D. degree from Imperial College, UK, and a B.Eng. degree from Tsinghua University, China. Before moving to academia, he joined IBM Research – China as a staff researcher and project manager, and worked as a postdoctoral researcher at Deutsche Telekom Laboratories, Germany, and as a visiting scholar at IBM T. J. Watson Research Center, USA. His current research interests include the Internet-of-Things (IoT), big data analytics, mobile computing, and wireless ad hoc, sensor, and mesh networks. He received the Distinguished Young Scholar Award in 2013, IBM First Plateau Invention Achievement Award in 2012, and IBM First Patent Application Award in 2011 and was interviewed by EEWeb.com as the Featured Engineer in 2011. He has published more than 50 prestigious conference and journal papers and owned more than 10 EU/U.S./China patents. He serves as the editor for KSII Trans. on Internet and Information Systems and the book editor for four books published by Taylor & Francis Group, USA. He also has served as the general chair of IEEE SECON’13 workshop on IoT Networking and Control, IEEE WCNC’12 workshop on IoT Enabling Technologies, and ACM UbiComp’11 Workshop on Networking and Object Memories for IoT. He served as the consultant to Bain & Company, and KPMG, USA, and the peer reviewer for Qatar National Research Foundation, and National Science Foundation, China. He is a member of IEEE and ACM.