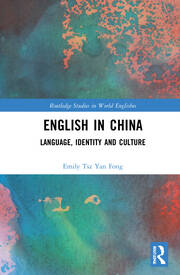 This volume discusses and explores Chinese identity through the lens of both the Chinese and the English languages.

Until the twentieth century, English was a language associated with capitalists and "military aggressors" in China. However, the massive progression of globalisation in China following the 1980s has transformed the language into an important tool for China’s modernisation. Regardless of the role English plays in China, there always has been a fear of the spread of culture(s) associated with English, leading to weakening of the Chinese identity. This fear resulted in the development of the ‘ti-yong’ principle: "Chinese learning for essence (ti), Western learning for utility (yong)."

Fong’s book aims to enhance understanding of the ‘ti-yong’ dichotomy in relation to people’s sense of being Chinese in China and the penetration of English into non-English speaking societies, resistances, the resultant tensions in people’s sense of personal and national identity, and their place in the world. Using Q methodology, the book presents observations based on data collected from four participant groups, namely high school and university students, teachers and parents in China to investigate their perspectives on the status and roles of English as well as Chinese.

Considering the growing international interest in China, this volume will appeal to readers interested in China’s contemporary society in general, and its language, culture and identity. It will be a useful resource for academics, researchers and students in the field of applied linguistics, language education and Chinese cultural studies, and can also be adopted as a reference book for undergraduate courses relating to language, identity and culture.

Introduction;  1. China and ‘Being Chinese’;  2. English in China: Education Policies, Changing Roles and Chinese Identity;  3. ‘English Learning with Chinese Characteristics’ or "Ti-yong Dilemma"?;  4. Q Methodology: A Semi-Quantitative Approach to Discourse Analysis;  5. Q Sort Results: An Overview of Existing Discourses About English and ‘Being Chinese’;  6. Grounded Theory, Keyword Approach and Critical Discourse Analysis;  7. "When We See A Foreigner in the Streets, we are No Long Too Surprised as if We See a Monster. It’s all Commonplace Now, they are Like Us as People": Development of a Chinese Plus Global Identity;  8. "There Used to be a Thinking That all Countries in the World Were Very Hostile Towards China, But After You Understand More, It Turns Out That They are Not That Hostile": ‘Multiple Worlds’ and ‘English-Speaking Self’;  9. Mandarin and Plurality of ‘Being Chinese’;  10. ‘Being Chinese’ in the Global World;  Epilogue

Emily Tsz Yan Fong is currently an Honorary Lecturer at the School of Culture, History and Language at the Australian National University (ANU). She has previously taught Linguistics and Translation at the ANU and the University of Hong Kong. Her research interests span across Global Englishes, Sociolinguistics, Translation and Chinese Studies.