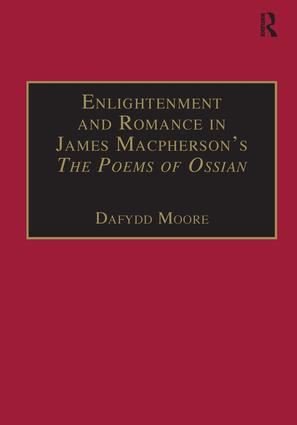 Enlightenment and Romance in James Macpherson’s The Poems of Ossian

This study examines the relationship between Enlightenment and romance through the work of James Macpherson and in particular his The Poems of Ossian. By re-reading Macpherson's work in ways not restricted by the sterile and by now largely settled debates over authenticity, Moore establishes Ossian's credentials to be considered as romance, in its manner of construction, its represented sensibility, and in its engagement with the potentialities and limitations of eighteenth-century discourses of sympathy and society. An increasing amount has been written on Macpherson over the last ten or so years, and at last it seems possible to talk about The Poems of Ossian without reference to questions of authenticity or charges of forgery. Yet the polarised debate over the authenticity of the Poems has been superseded by equally polarised arguments about such matters as the cultural significance and politics of Ossian, arguments in which the poems have been used as a convenient peg on which to hang various, often predetermined, positions. Fresh and groundbreaking, this study recentres Ossian revisionism by providing an account of a series of works increasingly talked about, but still little read or understood.

'This book's freshness of approach, wealth of reading, and bibliographical depth will benefit Macpherson studies and stimulate scholarly debate.' 18th Century Scotland '… impressive and subtle reading… achieves what good criticism should always aspire to, sending the reader back to rediscover texts she thought she knew… Intelligently conceived, vigorously and engagingly argued, Enlightenment and Romance should stand alongside the work of Howard Gaskill and Fional Stafford… This is an indispensable addition to the body of modern Ossian scholarship.' Scottish Studies Review

The series focuses on literary writing of the seventeenth and eighteenth centuries. Its objectives are to examine the individuals, trends, and channels of influence of the period between the Renaissance and the rise of Romanticism. During this period the English novel was invented, poetry began to tackle its unsteady relationship with non-literary discourse, and post-Shakespearean drama reinvented itself. Alongside studies of established figures, the series aims to include books on important but lesser-known writers and those who are acknowledged as significant but given slight attention: typically, William Cartwright, James Shirley, John Denham, Edmund Waller, Isaac Watts, Matthew Prior, William D. Avenant, Mark Akenside and John Dyer. Also of particular interest are studies of the development of literary criticism in this period, monographs which deal with the conditions and practicalities of writing including the practices of the publishing trade and financial and social circumstances of writing as a profession and books which give special attention to the relationship between literature and other arts and discourses. Monographs on a variety of writers and topics will be accepted; authors are invited to combine the best traditions of detailed research with astute critical analysis. The use of contemporary theoretical approaches will be acceptable, but every book will be founded primarily upon historical, biographical and textual scholarship.