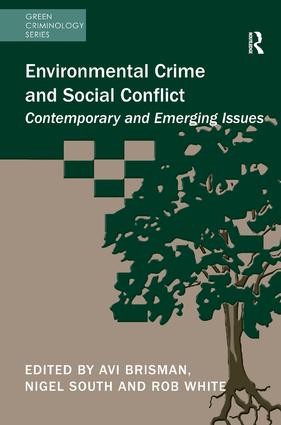 This impressive collection of original essays explores the relationship between social conflict and the environment - a topic that has received little attention within criminology. The chapters provide a systematic and comprehensive introduction and overview of conflict situations stemming from human exploitation of environments, as well as the impact of social conflicts on the wellbeing and health of specific species and ecosystems. Largely informed by green criminology perspectives, the chapters in the book are intended to stimulate new understandings of the relationships between humans and nature through critical evaluation of environmental destruction and degradation associated with social conflicts occurring around the world. With a goal of creating a typology of environment-social conflict relationships useful for green criminological research, this study is essential reading for scholars and academics in criminology, as well as those interested in crime, law and justice.

Avi Brisman is an Assistant Professor in the School of Justice Studies at Eastern Kentucky University in Richmond, KY, USA. He is co-editor, with Nigel South, of the Routledge International Handbook of Green Criminology (2013), and co-author, with Nigel South, of Green Cultural Criminology: Constructions of Environmental Harm, Consumerism, and Resistance to Ecocide (Routledge, 2014). Nigel South is Professor in the Department of Sociology, University of Essex, UK. He has teaching and research interests in criminology, drug use, and health and environmental issues, and has written extensively on green criminological theory, environmental crime and the concept of ecocide. In 2013, he received the Lifetime Achievement Award by the American Society of Criminology’s Division on Critical Criminology. Rob White is Professor of Criminology in the School of Social Sciences, University of Tasmania, Australia. Among his recent publications are Environmental Harm: An Eco-Justice Perspective (Policy Press, 2013) and Green Criminology: An Introduction to the Study of Environmental Harm (Routledge, 2014, with Diane Heckenberg).

Now two decades old, green criminology - the study of environmental harm, crime, law, regulation, victimization, and justice - has increasing relevance to contemporary problems at local, national, and international levels. This series comes at a time when societies and governments worldwide seek new ways to alleviate and deal with the consequences of various environmental harms as they relate to humans, non-human animals, plant species, and the ecosystem and its components. Green criminology offers a unique theoretical perspective on how human behavior causes and exacerbates environmental conditions that threaten the planet's viability. Volumes in the series will consider such topics and controversies as corporate environmental crime, the complicity of international financial institutions, state-sponsored environmental destruction, and the role of non-governmental organizations in addressing environmental harms. Titles will also examine the intersections between green criminology and other branches of criminology and other areas of law, such as human rights and national security. The series will be international in scope, investigating environmental crime in specific countries as well as comparatively and globally. In sum, by bringing together a diverse body of research on all aspects of this subject, the series will make a significant contribution to our understanding of the dynamics between the natural world and the quite imperfect human world, and will set the stage for the future study in this growing area of concern.