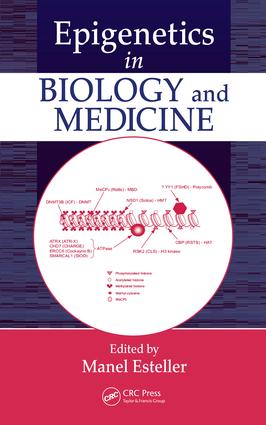 Epigenetics in Biology and Medicine

Anomalous epigenetic patterns touch many areas of study including biomedical, scientific, and industrial. With perspectives from international experts, this resource offers an all-inclusive overview of epigenetics, which bridge DNA information and function by regulating gene expression without modifying the DNA sequence itself. Epigenetics, in its

Manel Esteller, M.D., Ph.D. (Sant Boi de Llobregat, Barcelona, Catalonia, Spain), graduated in medicine with honors from the Universidad de Barcelona in 1992, where he also obtained his Ph.D., specializing in molecular genetics of endometrial carcinoma, in 1996. He was an invited researcher at the School of Biological and Medical Sciences at the University of St. Andrews (Scotland, UK), during which time his research interests focused on the molecular genetics of inherited breast cancer. From 1997 to 2001, Esteller was a postdoctoral fellow and a research associate at the Johns Hopkins University and School of Medicine (Baltimore, Maryland), where he studied DNA methylation and human cancer. His work was decisive in establishing promoter hypermethylation of tumor suppressor genes as a common hallmark of all human tumors. From October 2001 to September 2008 Dr. Esteller was the leader of the Cancer Epigenetics Laboratory of CNIO (Centro Nacional de Investigaciones Oncológicas), where his principal areas of research were the alterations in DNA methylation, histone modifications, and chromatin in human cancer. Since October 2008, Dr. Esteller has been the director of the Cancer Epigenetics and Biology Program of the Catalan Institute of Oncology (ICO) in Barcelona, professor of genetics in the School of Medicine of the University of Barcelona, and an ICREA research professor. Author of more than 190 original peer-reviewed manuscripts in biomedical sciences, Dr. Esteller is also a member of numerous international scientific societies and editorial boards and a reviewer for many journals and funding agencies. He is also associate editor for Cancer Research, The Lancet Oncology and Carcinogenesis, editor-in-chief of Epigenetics, advisor for the Human Epigenome Project, associate member of the Epigenome Network of Excellence, and president of the Epigenetics Society. His numerous awards include the Cancer Research Award from the European School of Medical Oncology (1999), first prize in basic research from Johns Hopkins University (1999), Investigator Award from the European Association for Cancer Research (2000), Carcinogenesis Award (2005), Beckman-Coulter Award (2006), Francisco Cobos Biomedical Research Award (2006), Swiss Bridge Award (2006), Innovation Award from the Commonwealth of Massachusetts (2007), and Human Frontier Science Program Award (2007). His current research is devoted to the establishment of the epigenome maps of normal and transformed cells, the study of the interactions between epigenetic modifications and noncoding RNAs, and the development of new epigenetic drugs for cancer therapy.