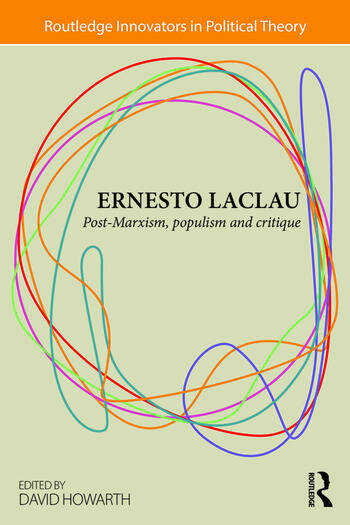 Ernesto Laclau has blazed a unique trail in political theory and philosophy since the early 1970s. In so doing, he has articulated a range of philosophical and theoretical currents into a coherent alternative to mainstream models and practices of conducting social and political science. The editors have focused on work in three key areas:

Laclau has developed an original conception of post-Marxist political theory that is grounded on a materialist theory of discourse. The latter is constructed from a range of theoretical and philosophical sources, including poststructuralism, psychoanalysis, linguistic theory and post-analytical philosophy. The centerpiece of this approach is the category of hegemony, which develops Antonio Gramsci’s seminal contribution to Marxist theory, and is in turn connected to a web of related concepts, including articulation, dislocation, the logics of equivalence and difference, political identification, myth and social imaginary. These ideas have informed a number of empirical and theoretical studies associated with the Essex School of Discourse Theory.

A central concern of Laclau’s writings has been the question of populism, both in Latin America where hebegan his interrogation of the phenomenon (especially the experience of Peronism), and then in his engagement with the "new social movements" and socialist strategy more generally. The concept of populism becomes a general way of exploring the "primacy of politics" in society.

Laclau is first and foremost an engaged intellectual who has consistently sought to theorize contemporary events and reality, and to debate with the leading intellectual figures of the day, with respect to questions of political principle and strategy. His recent debates with Judith Butler and Slavoj Žižek in Contingency, Hegemony, Universality: Contemporary Dialogues on the Left, published in 2011 (London: Verso), exemplify this critical ethos. He continues to elaborate his approach by challenging and articulating related approaches, and by situating his work in connection to the democratic Left.

David Howarth, ‘Introduction: Post-Marxism, Populism, and Critique’   Section I: Post-Marxist Political Theory: Discourse, Hegemony, and Signification   1. ‘Discourse’  2. ‘Dislocation and Capitalism’ and ‘Social Imaginary and Democratic Revolution’  3. ‘Why do Empty Signifiers Matter to Politics’  4 ‘The Death and Resurrection of the Theory of Ideology’  5 ‘Ideology and Post-Marxism’  Section II: Analyzing Populism  6 ‘Towards a Theory of Populism’  7 ‘Populism: What’s in a name?’  8 ‘Why Constructing a "People" is the Main Task of Radical Politics'  Section III: Critical Engagements  9. ‘The Time is out of Joint’  10 ‘Can Immanence Explain Social Struggles’  11 ‘On Real and Absolute Enemies’  12 ‘Bare Life or Social Indeterminacy’  13 ‘Community and its Paradoxes: Richard Rorty’s "Liberal Utopia"’  Conclusion  14. An Interview with Ernesto Laclau

David Howarth is a Reader in the Department of Government and Co-Director of the Centre for Theoretical Studies at the University of Essex.