Ethics and Governance in Sport
The future of sport imagined 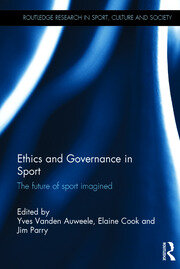 Ethics and Governance in Sport: The future of sport imagined

What is, or what should be, the function of sport in a globalized, commercialized world? Why does sport matter in the 21st century? In Ethics and Governance in Sport: the future of sport imagined, an ensemble of leading international experts from across the fields of sport management and ethics calls for a new model of sport that goes beyond the traditional view that sport automatically encourages positive physical, psychological, social, moral and political values.

Acknowledging that sport is beset by poor practice, corruption, and harmful behaviors, it explores current issues in sport ethics, governance and development, considering how good governance and the positive potentials of sport can be implemented in a globalized sporting landscape. Ethics and Governance in Sport suggests a future model of sport governance based on well substantiated projections, and argues that identifying the root causes of harmful behavior, those things that are characteristic of sport, and engaging sport managers, policy makers and leaders of sport organizations, is essential if sport is to thrive.

The book’s interdisciplinary examination of sport, encompassing philosophy, sociology, economics, management and sport development, and its forward-looking approach makes it important reading for advanced students, researchers and policy makers with an interest in the place and development of modern sport. Its clear messages invite self-reflection and discussion, especially within sports organizations.

Preface (Giacomo Santini)  Introduction (Yves Vanden Auweele, Elaine Cook and Jim Parry)  Part 1: Re-Thinking And Implementing Concepts And Practices In The Future Of Sport  Introduction (Yves Vanden Auweele, Elaine Cook & Jim Parry)  1. Ethics And The Integrity Of Sport: Issues For The Next Decade (Mike McNamee)  2. Restoring Sport’s Integrity: Beyond Ad Hoc Solutions In Challenging Aberrations In Sport (Yves Vanden Auweele)  3. Olympism In The 21st Century (Jim Parry)  4. The ‘Fast Track’ As A Future Strategy For Achieving Gender Equality And Democracy In Sport Organizations (Jorid Hovden)  5. Shifting From Reducing Emotional Harm To Optimizing Growth: The Role Of Athlete-Centered Coaching (Elaine Cook & Gretchen Kerr)  6. Ludo-Diversity: An Argument For A Pluralistic Movement Culture (Roland Renson)  Part 2: Good Governance In A Globalized Sports World  Introduction (Bart Vanreusel)  7. Accountability In The Global Regulation Of Sport: What Does The Future Hold? (Hilary Findlay)  8. The Creation Of An Independent Body For The Control Of Governance In Sport Worldwide (Sandro Arcioni)  9. The Rise And Fall Of Mega-Sport Events: The Future Is In Non-Mega-Sport Events (Marijke Taks)  10. The European Union As A Normative Power In International Sport (Arnout Geeraert)  11. We Are The Game? Player Democratization And The Reform Of Sport Governance (Peter Donnelly)  Part 3: Fair (Financial) Management In A Globalized Sports World  Introduction (Bart Vanreusel & Stefan Kesenne)  12. The Growing Gap Between Small-And Large-Country Football Teams In Europe (Stefan Kesenne)  13. Paradoxes In Professional Road Cycling: A Plea For A New Cycling Industry (Wim Lagae & Daam Van Reeth)  14. Sport Is ’Not’ For All: Towards A Renewed Future For Sport For All As A Right (Bart Vanreusel)  15. What If Sport And The Law Have Become Interlocked? The Case Of The EU (Frank Hendrickx)  Part 4: Sport And Body Enhancement: Ethics And Possibilities  Introduction (Bengt Kayser & Jan Tolleneer)  16. Practical Self-Understanding Of Athletes And The Future Of Sport (Jan Vorstenbosch)  17. A Glimpse Into The Morally Ambiguous Future Of Elite Sport: The Lance Armstrong Story (William J. Morgan)  18. From Zero-Tolerance Towards Risk Reduction In Doping: Learning From The Failure Of The War On Drugs (Bengt Kayser)  Part 5: Re-Conceptualizing ‘Sport For Development’  Introduction (Karen Petry)  19. The Future Of Sport For Development: From Ideology To Sociology (Fred Coalter)  20. The Critical Participatory Paradigm And Its Implications (Oscar Mwaanga & Kola Adeosun)  21. Perspectives From The South: Sport And Development As A Priority On The International Policy Agenda (Marion Keim & Christo De Coning)  22. The Concept Of ‘Development’ And The Sport-Related (Future) Approach (Karen Petry & Marius Runkel)  Epilogue (Yves Vanden Auweele, Elaine Cook and Jim Parry)

Yves Vanden Auweele is Professor (Em.) in Sport Psychology at Katholieke Universiteit Leuven (KULeuven, Belgium). Since 1980 he has taught psychology to physical education, psychology, and medicine students. He has published on stress and abuses in sport, on psychology for physical educators and on sport for development. He was coordinator of the European Masters Program for Exercise and Sport Psychology, President of the Belgian Society of Sport Psychology, and member of the Managing Council of the European Federation of Sport Psychology (FEPSAC). He was also involved in a sport and development project (2002-2014) with the University of the Western Cape (South Africa). He is still an active member of the Cultural and Scientific Committee of Panathlon International and was senior author of the Panathlon Declaration of Ethics in Youth Sport

Elaine Cook is a doctoral candidate at the University of Toronto (Canada), and a member of the Panathlon Cultural and Scientific Committee (CSC). Her research explores coach behaviors, and interventions designed to influence coach behaviors in such a way that athletes flourish. Elaine is also a certified Solution-Focused Coach (CSFC).

Parry was Head of the Department of Philosophy, University of Leeds, UK, and is now Visiting Professor at the Faculty of PE and Sport, Charles University in Prague. He has been International Professor of Olympic Studies, Autonomous University of Barcelona 2003, University of Ghent 2009, Gresham College, London 2012, Russian International Olympic University, Sochi 2013-2015, and International Olympic Academy, Greece1986-2015. He is co-author of The Olympic Games Explained, 2005, Sport and Spirituality, 2007, and Olympic Ethics and Values in Contemporary Society, 2012; and co-editor of Ethics and Sport, 1999, Theology, Ethics and Transcendence in Sport, 2010, An Introduction to the Phenomenological Study of Sport, 2012, Olympic Ethics and Philosophy, 2012, and Fields of Vision - the Arts in Sport, 2014.