Ethics and Military Strategy in the 21st Century
Moving Beyond Clausewitz 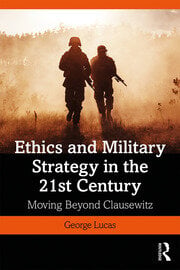 Ethics and Military Strategy in the 21st Century: Moving Beyond Clausewitz

This book examines the importance of "military ethics" in the formulation and conduct of contemporary military strategy.

Clausewitz’s original analysis of war relegated ethics to the side-lines in favor of political realism, interpreting the proper use of military power solely to further the political goals of the state, whatever those may be. This book demonstrates how such single-minded focus no longer suffices to secure the interest of states, for whom the nature of warfare has evolved to favor strategies that hold combatants themselves to the highest moral and professional standards in their conduct of hostilities. Waging war has thus been transformed in a manner that moves beyond Clausewitz’s original conception, rendering political success wholly dependent upon the cultivation and exercise of discerning moral judgment by strategists and combatants in the field. This book utilizes a number of perspectives and case studies to demonstrate how ethics now plays a central role in strategy in modern armed conflict.

This book will be of much interest to students of just war, ethics, military strategy, and international relations.

5. The Principle of Last Resort

6. The Case for Preventive War

George Lucas is Professor Emeritus at the U.S. Naval Academy and Naval Postgraduate School, and currently serves as a Senior Fellow at the Stockdale Center for Ethical Leadership at the Naval Academy. Lucas is author of Ethics and Cyber Warfare (2017) and Military Ethics: What Everyone Needs to Know (2016), and editor of the Routledge Handbook of Military Ethics (2015).

'George Lucas has done a timely and superb analysis of ongoing dramatic changes in warfare and the associated effects this is having on the role of ethics for strategic leaders. He describes how emerging domains of war in space and cyber not only raise new ethical challenges but also expand their complexity dramatically at the same time bringing ethical and moral choice to the center of decision making in war. This should be read carefully by senior political and military leaders and will be invaluable to professional military development around the globe.'— Col. Jeff McCausland, Dean (ret), U.S. Army War College and Former Director of the National Security Council Staff, USA.

'This volume is an excellent and sorely needed contribution to the discussion of ethics, Just War and strategy, looking at Clausewitz with fresh eyes as well as considering how recent Revisionist discussions and ideas in Just War apply to post-modern warfare. That Lucas is able to bring these three elements together with relevant and concrete case studies and examples makes this a must read for scholars and practitioners alike.'

'George Lucas’s brilliant new book offers a novel and eclectic "theory of just war theory" and much more. Its nuanced reading of Clausewitz, insightful contextualization of revisionist claims, deep understanding of technology, and timely appeal to classical wisdom make for a unique and urgently needed contribution to the ethics of war.'—

'An insightful and timely contribution to the debate about how the Just War Tradition relates to the conflicts of today and the future.'

'In Ethics and Military Strategy in the 21st Century: Moving Beyond Clausewitz, George Lucas systematically makes the case for what many of us have sensed intuitively -- changes in the nature of modern warfare have made ethics a key strategic concern. Humanitarian interventions, irregular warfare, and hybrid warfare are no longer exceptional cases, but instead typify the sorts of conflicts American forces will be asked to fight in the future. Such missions will be unwinnable without a commitment to ethical action -- an "inconvenient truth" that will put more pressure on individual service personnel to understand the ethical implications of their individual actions in the context of mission demands. Eminently readable, this is just the sort of book we need right now.'--Valerie Morkevicius, Associate Professor of Political Science, Colgate University