Ethnic Conflict and Terrorism
The Origins and Dynamics of Civil Wars 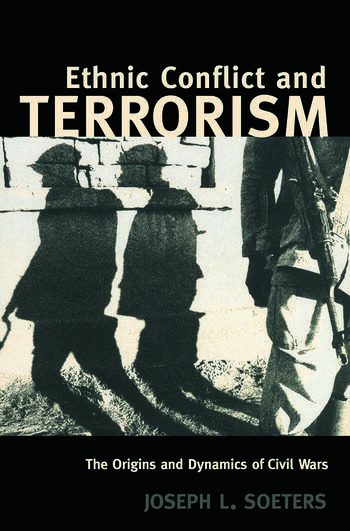 Ethnic Conflict and Terrorism: The Origins and Dynamics of Civil Wars

In the early 1990s a number of violent civil wars and large-scale ethnic crises shocked the world. In Rwanda, Bosnia, Chechnya and elsewhere atrocities were committed that led to hundreds of thousands of dead and displaced people.

Explaining the origins and dynamics of such inhuman actions and events, this new sensitive and detailed analysis includes:

Although the number of these conflicts has diminished over the years, the phenomenon has not disappeared: in the Sudan, the Congo, Sierra Leone, Liberia, Nigeria, Afghanistan and Iraq people are still being killed in large numbers, without authorities being able to avert or end the hostilities. On nine-eleven large-scale terrorist attacks in Washington and New York shocked the world again, and since then other violent events took place in Bali, Casablanca, Riyadh, Moscow, Istanbul and Madrid.

This book of concern to all people, because recent history has shown us that such violence can strike everywhere and at any time. The final chapter delivers a number of constructive considerations aiming at the development of policies to prevent and stop such conflicts. This is an important new contribution to tackling the complex challenges of the twenty first century.

This book will be of great interest to all students and scholars of contemporary history, development studies, political and social sciences and International Relations.

Joseph L. Soeters is a Professor of social sciences and organization studies at the Royal Netherlands' Military Academy, the Netherlands' Naval Academy and the Netherlands' War College; in addition, he is affiliated as a Professor in Organizational Sociology at Tilburg University, the Netherlands as well as TIAS Business School. Between 1999 and 2003 he acted as dean of the Military Academy. His main areas of interest are in the field of international (military) collaboration, post-conflict nation-building including civil-military cooperation, managing diversity and globalisation. He has published some 140 articles and chapters in edited volumes, both in Dutch and English (with some translations in German, Spanish, French and Russian). He (co-) edited five books, both in Dutch and English. He is involved with projects in Eritrea, Bolivia and the Baltic states. In the period 2002-2006 he acts as the Vice-President of the Research Committee "Armed Forces and Conflict Resolution" of the International Sociological Association.