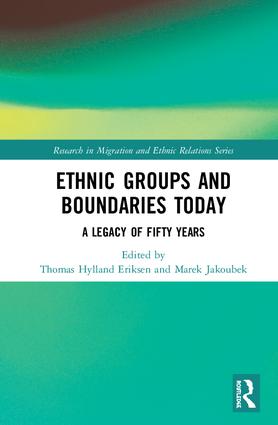 The publication of Fredrik Barth’s Ethnic Groups and Boundaries marked a milestone in the conceptualization of ethnicity and ethnic groups and opened a new field of enquiry in the social scientific study of ethnicity.

Ethnic Groups and Boundaries Today: A Legacy of Fifty Years demonstrates the enduring significance of the work, identifying its shortcomings and showcasing the state of the art today, fifty years after the publication of the groundbreaking original. Bringing together a team of leading contributors, all of whom have been inspired by Barth's theory and have made significant contributions of their own to the theorisation and research of ethnicity, this volume assesses the theoretical approach presented in Ethnic Groups and Boundaries, both in the context of its time and with the hindsight of the developments in the social sciences since then. It emphasizes the legacy of the original text and determines its significance, whilst identifying and elaborating on the main lines of the subsequent developments of the concept of ethnicity that were influenced by Ethnic Groups and Boundaries, but that have since developed and superseded the original. As such, it will appeal to scholars across the social sciences with interests in the concept and study of ethnicity.

4. Katherine Verdery: The Dangerous Shoals of Ethnic Groups and Boundaries: A Personal Account

8. Valery Tishkov: From Ethnos to Ethnicity and Back

10. Steven Vertovec: Fredrik Barth and the social organization of difference

11. Pnina Werbner: Intersectionality and Situationalism: Towards a (more) dynamic interpretation of Ethnic groups and boundaries

12. Thomas Hylland Eriksen: Beyond a boundary: Flows and mixing in the Creole world

14. Marek Jakoubek: A "Hollow" Legacy of Ethnic Groups and Boundaries: A critique of the reading and quoting "Barth 1969"

15. Marek Jakoubek and Lenka Budilova: Fredrik Barth and the study of ethnicity: reflections on ethnic identity in a world of global political, economic and cultural changes. Interview with Professor Emeritus Gunnar Haaland

Thomas Hylland Eriksen is Professor of Social Anthropology at the University of Oslo, Norway. He has conducted research on the politics of identity for over three decades, and among his publications in the field are Us and Them in Modern Societies, Ethnicity and Nationalism: Anthropological Perspectives and Globalization: The Key Concepts, Paradoxes of Cultural Recognition and Fredrik Barth: An Intellectual Biography.

is the Head of the Department of Ethnology at Charles University, Prague. His professional interests are in the theory of ethnicity and epistemology of social anthropology. He has conducted fieldwork in Voyvodovo, the former Czech village in Bulgaria, and in Roma settlements in eastern Slovakia.