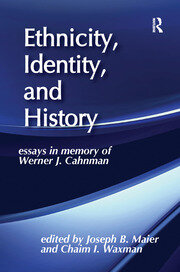 In a wide-ranging analysis of the drama of history, the importance of ethnicity, and Jewish identity, these essays explore areas of political and cultural disciplines fused with elegance in the work of the late eminent sociologist Werner J. Cahnman. The prominence of the American and European historians, philosophers, geographers, sociologists, and anthropologists in this volume represents evidence of the wide effect that Cahnman's work had on scholars in a number of fields in academic work. This volume will make timely and rewarding reading for social scientists and historians, especially those concerned with the religious factor.