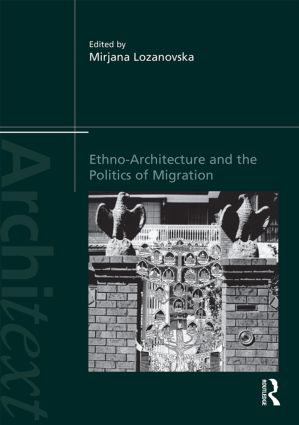 Ethno-Architecture and the Politics of Migration

Ethno-Architecture and the Politics of Migration explores the interface between migration and architecture. Cities have been substantially affected by transnational migration but the physical manifestations of migration in architecture – and its effect on streetscape, neighbourhood and city – have so far been understudied.

This contributed volume examines how migrants interact with, adapt, and construct new architecture. Looking at the physical, urban and cultural impact of these changes on a variety of sites, the authors explore architecture as an identity category and investigate what buildings and places associated with migration tell us about central questions of belonging, culture, community, and home in regions such as North America, Australia and the UK.

An important contribution to debates on place identity and the transformation of places as a result of mobility and globalised economies in the 21st century.

"The intention of Ethno-Architecture and the Politics of Migration is therefore more than just to valorise a range of places, to legitimise them through bringing them into the fold of architecture's normative discourse. Nevertheless, the book is a timely reminder that the "everyday multiculturalism" that waves of migration have pro­duced in the cities of Australia is a kind of treasure."

Paul Walker, University of Melbourne,The Journal of the Society of Architectural Historians, November 2016

Mirjana Lozanovska is a Senior Lecturer and leads the Cultural Ecology Research Group at the School of Architecture and Built Environment at Deakin University, Australia.