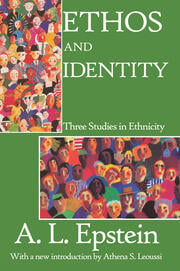 Ethos and Identity asks the ever-puzzling question: What is ethnicity and how is it to be explained? In a new introduction to this work, Athena Leoussi describes Epstein's response to this challenging age-old query, and demonstrates why this classic volume is of continuing importance.

Originally published thirty years ago, Ethos and Identity still fascinates the twenty-first century reader. Epstein's volume explains ethnic revivals of the past century, while the new introduction discusses those that occurred after the book's original publication, such as during the collapse of the communist Eastern bloc in the 1990s. Epstein offers insight into other ethnic reawakenings, such as that experienced during the late 1960s and early 1970s after the collapse of post-colonial east Asia. Prior to this, in the late 1940s and early 1950s, following World War II and the establishment of the United Nations, it was expected that ethnic identifications would be superseded by a more modern, universalistic, rational, civic- or class-based form. This did not occur. Instead, as nations collapsed and were reborn in new forms, people continued to identify with their ethnicity in describing themselves, even when their countries, at least as they knew them, no longer existed. In short, people and their cultures live on long after political and national boundaries have disappeared and been redrawn. Epstein's decisive contribution to the understanding of ethnicity proposes a "social anthropology of affect." People incorporate the social structure of ethnicity into the makeup of their personality and, thus, self-identification.

Ethos and Identity is sure to interest students of anthropology, sociology, psychoanalysis, psychology, and ethnicity.