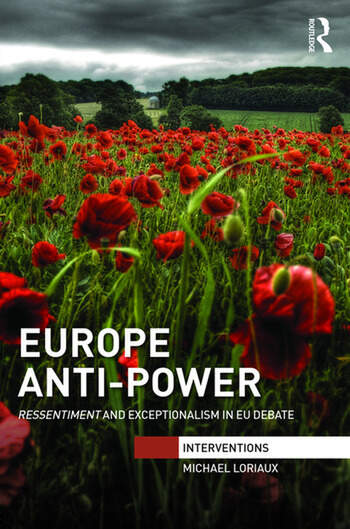 The EU seeks to define a role for itself in power politics while remaining firm in its rejection of power politics. In order to make power compatible with the European project, EU debate has appended a number of progressive adjectives to the word "power," adjectives like "civilian" and "normative," among others. This book asks what is power, such that it can be modified, tamed, and modulated by adjectives, yet remain "powerful"?

Loriaux passes EU debate on power through the mill of phenomenological and post-phenomenological analysis, juxtaposing it against writings by Machiavelli, Agamben, Thucydides, Nietzsche, Patocka, and Levinas. The book locates power in "power/play," the theatrical, staged representation of threat that generates aesthetic effect and undecidability. Power/play endows the word "power" with perlocutionary force, which the adjectives of EU "qualified" power actually enhance rather than moderate. Loriaux argues that EU discourse on power therefore risks inviting EU "exceptionalism," or risks lapsing into an expression of EU ressentiment, rather than advancing a new, progressive understanding of "power." If European Union is to remain steadfast in its opposition to power politics, it must represent itself as "anti-power."

This book will be of interest to those who work in the area of EU foreign policy, as well as to those who have a more general theoretical interest in the concept of power.

Michael Loriaux is Professor of Political Science at Northwestern University, USA. His teaching and research areas are International Relations, the European Union and Critical Theory. He is the author of European Union and the Deconstruction of the Rhineland Frontier (2008).

'The project of European integration has often been portrayed as an attempt to escape from the destructive power politics that haunted the European continent for so long, both in relations among European states as well as in Europe’s external relations. Michael Loriaux’s superb Europe Anti-Power reconfigures the debate on Europe and power. His highly original readings of the works of Machiavelli, Agamben, Thucydides and others on the meaning of power underpin his bold claim: the European Union should (re)constitute itself as "anti-power." This book is a must read not only for everyone with an interest in European politics, but also for scholars and students concerned with power in IR and Political Science.' - Stefan Borg, Swedish Institute for International Affairs and Stockholm University, Sweden

'Are we duped by the necessity of power? Lauriaux's deconstruction of conventional readings of EU power and his plea for a conception of Europe as anti-power are a provocative and overdue challenge to the debate about the EU's role in global politics.' - Thomas Diez, University of Tuebingen, Germany