Europe and Iran
The Nuclear Deal and Beyond 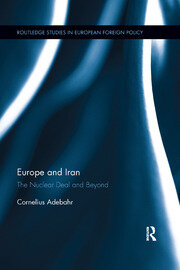 Europe and Iran: The Nuclear Deal and Beyond

The EU’s approach to Iran has emerged as one of the few successes of European foreign policy. Still, its role in international negotiations from 2003, as much as its broader approach to Iran, are generally poorly appreciated by policy-makers in Europe, the United States, and around the world.

This book aims to explain the specifics of the EU’s approach to Iran, taking into account both the complexity of European foreign policy, in particular within transatlantic relations, and Iran’s (aspired) place in the international order. It informs the reader about the special negotiation format that included a number of world powers as well as multilateral bodies such as the International Atomic Energy Agency (IAEA) and the UN Security Council. Furthermore, it provides an outlook on European post-nuclear deal strategies and offers conclusions on the effectiveness of Europe’s multilateral approach to foreign policy. By looking at the EU’s diplomatic activities towards Iran over more than a decade, the book focuses on Europe’s actorness in international politics.

This text will be of key interest to scholars, students and practitioners involved or interested in the European Union, Iran, U.S. foreign policy as well as Foreign and Security policy, including sanctions policy, and more broadly to European Politics, Middle East studies and international relations.

Part I: Actorness, Multilateralism, and Effectiveness: How European Foreign Policy and the Iran Nuclear File are Intertwined

1. Introduction: Summary and Overview of the Book

Part II: The EU's Actorness on the Iran File

5. EU and US Sanctions: From Policy Ersatz to Powerful Instrument

6. The Transatlantic Tandem and Iran

8. The Multilateral Context: The Non-proliferation Regime, the IAEA and the UN

9. The Three Phases of (Non-)Negotiations with Iran

Part IV: What’s next? The Successful Deal of 2015 and Beyond

10. Assessing the 2015 Deal in the Light of European Interests

12. Conclusion: Europe’s Multilateralism – Is It Effective After All?

Cornelius Adebahr is a Political Analyst and entrepreneur based in Berlin, Germany, specializing on European foreign policy and transatlantic relations. He has consulted with political and academic institutions as well as international think tanks in Brussels, Tehran, and Washington, DC.

'The EU played an indispensable role in achieving a diplomatic resolution to the Iran nuclear challenge. Adebahr usefully identifies the factors that allowed EU foreign policy to deliver and what policy and institutional investments are required to build on the EU’s success at a moment of extraordinary political and geopolitical headwinds.' – Ambassador William J. Burns, President, Carnegie Endowment for International Peace and former U.S. Deputy Secretary of State.

'In this much awaited book, Cornelius Adebahr provides a comprehensive and compelling account of the EU's greatest foreign policy success to date: The E3 + 3 nuclear deal with Iran. Adebahr convincingly highlights not only the significance of the deal but above all how and why the process of achieving it quintessentially reflected the "European way": the resolution of global problems through patient, at times stubborn, multilateral cooperation. A must read for anyone wishing to understand the EU's role in the world.' – Nathalie Tocci, Director, Istituto Affari Internazionali, Italy.

'Cornelius Adebahr has provided an invaluable contribution to the saga of the Iran nuclear deal by detailing Europe’s pivotal role in starting and maintaining dialogue with the Islamic Republic. This ‘coming of age’ for Europe as an international actor bodes well for safeguarding the nuclear agreement at a time of new tension between the US and Iran.' - Barbara Slavin, the Atlantic Council, Washington, USA.

'Cornelius Adebahr is among the few people in the world who combines an intimate understanding of the politics of Brussels, Tehran, and Washington. Europe and Iran: The Nuclear Deal and Beyond provides a uniquely informed, dispassionate, and lucid perspective.' - Karim Sadjadpour, Carnegie Endowment for International Peace, USA.

'The Iran nuclear deal was hugely important for regional security, multilateral diplomacy and the global non-proliferation regime. Cornelius Adebahr masterfully explores the role of the EU in creating the accord and the role it must continue to play in sustaining, enforcing and expanding upon it.' - Mark Fitzpatrick, International Institute for Strategic Studies, USA.

'The Iran nuclear deal, one of the most important diplomatic breakthroughs of the 21st century, proves that multilateralism is the best instrument to prevent nuclear proliferation and improve global stability. At a time when the international order is under strain, it is vital to bring the spotlight to the European Union’s approach to world affairs and preserve its achievements. With remarkable analytical skill, Cornelius Adebahr reflects on the links between the nuclear deal and the European Union’s role as a global actor, thus making an outstanding contribution to the study of security and international relations.' - Javier Solana, President of ESADEgeo, Spain and former High Representative for Common Foreign and Security Policy of the European Union.

'... The JCPoA [Iran Nuclear Deal] has survived thus far, but its future - in its current form at least - is increasingly in jeopardy and it is the tense conditions in 2018 which provide the backdrop for Adebahr's excellent analysis of the JCPoA and the European role in ensuring its success... Adebahr skilfully dissects the key parts of the nuclear agreement to show its strengths and potential pitfalls as well as the regional fallout from what has been celebrated as a twenty-first century counter proliferation success story...' - Anoush Ehteshami, Professor of International Relations in the School of Government and International Affairs, Durham University, UK. Book review in Global Policy Journal, March 2018.

"...The writing style is refined and although it specifically targets a well informed audience, the book is also suitable for providing non-experts with some initial insight into the nuclear deal." - Andrea Aversano Stabile, Istituto Affari Internazionali (IAI), Italy. Book Review in The International Spectator, Vol. 53, No. 3, pp 151-152, 2018