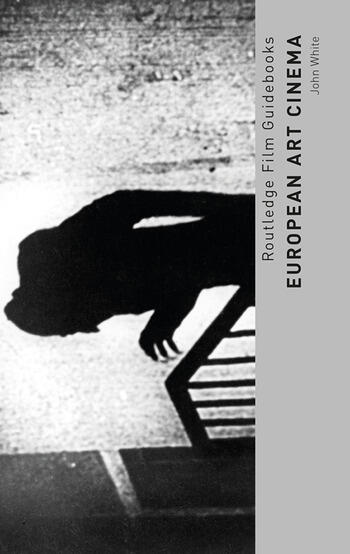 European art cinema includes some of the most famous films in cinema history. It is elite filmmaking that stands in direct opposition to popular cinema; and yet, it also has an intimate relationship with Hollywood.

This guidebook sketches successive phases of art cinema in Europe from its early beginnings of putting Shakespeare’s plays on the screen, through movements such as Expressionism and Surrealism, to the New Waves of the 1960s and more recent incarnations like Dogme 95. Using film examples, John White examines basic critical approaches to art cinema such as semiotics and auteur theory, as well as addressing recurring themes and ideas such as existentialism and Christian belief. The different levels of political commitment and social criticism, which appear in many of these films, are also discussed.

John White is Senior Lecturer in Film and Media at Anglia Ruskin University, UK. He is co-editor of The Routledge Encyclopedia of Films (2015) and author of Westerns (2011).

‘John White’s erudite and expansive new work revitalises our approach to and understanding of European art cinema. Expertly tracing the history of the genre, White’s book offers a compelling set of case studies – from Lang to Bresson to Bergman to von Trier – that get straight to the heart of what makes these films so sophisticated, enduring and meaningful.’

‘This rich and meticulously researched text, with its compelling blend of context, theory and case studies, offers a fresh and refreshing approach to a complex body of cinema. Clearly written and organised, with detailed filmic analysis throughout, the book acknowledges the challenges of tackling a contested area of film studies and provides a fearless re-evaluation of "art film for cinema exhibition" made in Europe.’

, Head of the School of Film and Media, University of Lincoln, UK