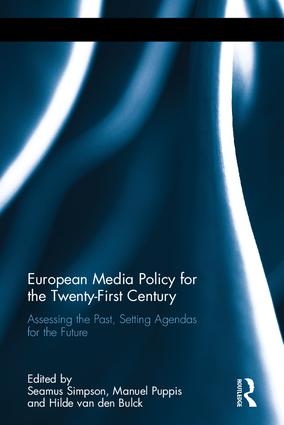 Assessing the Past, Setting Agendas for the Future, 1st Edition

Media policy issues sit at the heart of the structure and functioning of media systems in Europe and beyond. This book brings together the work of a range of leading media policy scholars to provide inroads to a better understanding of how effective media policies can be developed to ensure a healthy communication sector that contributes to the wellbeing of individual citizens, as well as a more democratic society. Faced with a general atmosphere of disillusionment in the European project, one of the core questions tackled by the volume’s contributors is: what scope is there for European media policy that can exist beyond the national level? Uniquely, the volume’s chapters are structured around four key policy themes: media convergence; the continued role and position of public regulatory intervention in media policy; policy issues arising from the development of new electronic communication network environments; and lessons for European media policy from cases beyond the EU. In its chapters, the volume provides enriched understandings of the role and significance of policy actors, institutions, structures, instruments and processes in communication and media policy.

Seamus Simpson is Professor of Media Policy at the University of Salford. His research interests are in European and global communications policy, areas in which he has published widely. Seamus's research has been funded by the ESRC and the European Commission. He was part of the PricewaterhouseCoopers team which undertook the first EU-funded evaluation of the pan-European communications regulator, BEREC, in 2012. Seamus is Chair of the Communication Law and Policy Division of the International Communication Association and an ICA Board of Directors member. In 2015, hejoined the Oxford Research Encyclopedia: Communication as a Senior Editor (Oxford University Press).

Hilde Van den Bulck (PhD) is full professor of communication studies and head of the Media, Policy and Culture research group at the University of Antwerp in Belgium. She combines expertise in media culture and identity with expertise in media policies and structures, looking at the impact of technological, economic, political and cultural developments on media structures and policies, with a focus on public service broadcasting. In both areas she has researched and published in books and ISI journals.

Through publishing comparative and region-specific studies, this series aims to bring Asian, Latin American, African, and Middle Eastern media and cultural studies scholarship to the English speaking world and--in addition-- to promote cutting edge research on the globalization of media, culture, and communication.