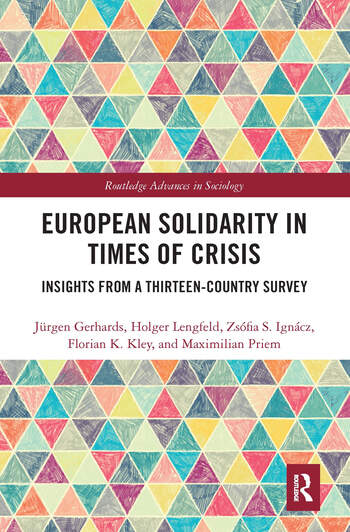 European Solidarity in Times of Crisis: Insights from a Thirteen-Country Survey

The euro crisis, several sovereign debt crises, the Great Recession, the refugee crisis, and Brexit have all challenged Europeans’ willingness to show solidarity with other European citizens and member states of the European Union. European Solidarity in Times of Crisis provides a clear theoretical framework to understand European solidarity for the first time. It offers a systematic empirical approach to determine the strength and causes of European solidarity. The authors distinguish between four domains of solidarity and test a set of theoretically derived criteria with a unique dataset to investigate European solidarity.

Based on a survey conducted in thirteen EU member states in 2016, the empirical analysis leads to some unanticipated results. Europeans display a notably higher degree of solidarity than many politicians and social scientists have presumed so far. This especially applies to the support of people in need (welfare solidarity) and the reduction of territorial disparities between rich and poor EU countries (territorial solidarity), but also to the domain of fiscal solidarity (financial support of indebted EU countries). This optimistic view is less true for the domain of refugee solidarity. While citizens of western and southern EU countries accept the accommodation of refugees and their allocation between European countries, the majority of people in eastern European countries do not share this point of view.

The book will appeal to students and scholars in fields such as comparative sociology, political science, social policy and migration research, and European studies. It is also relevant to a non-academic audience interested in the development of the European project.

1. Introduction—European crises and the existence of European solidarity

is Professor of Sociology at Leipzig University and Research Fellow at the German Institute of Economic Research Berlin. His research focuses on social stratification, inequality and European social integration. Among his publications are Does Physiological Distribution of Blood parameters in Children Depend on Socioeconomic Status? Results of a German Cross-sectional Study (BMJ Open, 2018, with K. Rieger, M. Vogel, C. Engel, U. Ceglarek, K. Harms, U. Wurst, M. Richter, W. Kiess); Drifting Apart or Converging? Grades of Non-traditional and Traditional Students over the Course of Their Studies (Higher Education, 2017, with T. Brändle); Do European Citizens Support the Idea of a European Welfare State? (International Sociology, 2016, with J. Gerhards & J. Häuberer); The Long Shadow of Occupation: Volunteering in Retirement (Rationality and Society, 2016, with J. Ordemann); European Citizenship and Social Integration in the European Union (Routledge, 2015, with J. Gerhards); The Growing Remit of the EU in Climate Change Policy and Citizens’ Support across the Union (Journal of European Social Policy, 2008, with J. Gerhards).

is a researcher and lecturer at the Institute of Sociology, Leipzig University, Germany. Previously, he was a researcher in the HORIZON 2020-Project, Solidarity in European Societies: Empowerment, Social Justice and Citizenship (SOLIDUS) at the Chair for Societal Institutions and Social Change at the Institute of Sociology at Leipzig University. His main research fields are European social integration, social stratification research, and quantitative data analysis.

is a data analyst at DIW Econ GmbH, Germany. Previously he worked as a researcher in the project European Solidarity at the Chair of Macrosociology at the Freie Universität Berlin. His main research interests include European sociology, inequality and living conditions. His most recent publication is Everyone Happy: Living Standards in Germany 25 Years after Reunification (DIW Economic Bulletin, 2014, with J. Schupp).

Could and should the EU become more solidaristic? This is a key question for all Europeans. To move beyond superficial answers, we need to clearly spell out the meaning of "EU solidarity" and then tap citizens’ orientations. This volume makes a fundamental step forward in this direction. It distinguishes between fiscal, territorial, welfare and refugee solidarity and finds a surprisingly high popular support for enhancing the "caring" mission of the EU.  The authors offer not only an innovative and rich analytical framework but also invigorating signals for all those who have not lost faith in the European project.

I believe that the political elites – first and foremost the despondent social democratic parties – underestimate the disposition of their voters to engage themselves for projects reaching beyond narrow self-interest. The fact that this view isn’t just a reflection of unfulfilled philosophical ideals can be seen in the most recent publication by the research group led by Jürgen Gerhards and Holger Lengfeld, who for years has pursued wide-ranging and intelligent comparative studies on solidarity in thirteen EU member states. They have not only found indicators for a shared European identity distinct from national identity, but also an unexpectedly high willingness to support European policies that would imply redistribution across national boundaries.

European Solidarity in Times of Crisis is a superb contribution to the literature on the dynamics of social transformation in Europe and to the sociology of the European Union. At a time when nationalist populism is on the rise, it demonstrates that the vast majority of European Union citizens feel a strong sense of obligation toward other Europeans. Through rigorous and reader-friendly empirical analysis of a public opinion survey conducted in thirteen countries, Jürgen Gerhards and his co-authors correct the impression conveyed by the media of a European Union corroded by national egoism.

Remarkably, in a time of apparent nationalist renaissance this volume provides us with an optimistic message for European integration – Europe’s citizens are actually much more solidary with citizens of other EU countries than many social scientists and politicians tend to presume. The data from thirteen countries show that Europe is a space of solidarity in terms of sharing wealth, income, and fiscal resources. Even if European solidarity is more problematic in terms of sharing refugees, and even if solidarity might generally be more conditional than these data suggest at first sight, this volume’s message comes at the right time and its importance cannot be overestimated.