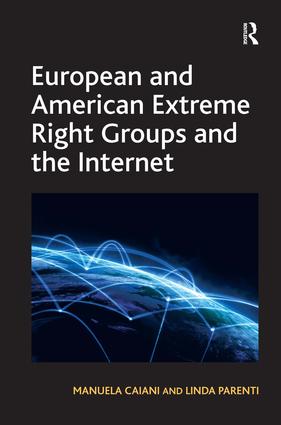 European and American Extreme Right Groups and the Internet

How do right-wing extremist organizations throughout the world use the Internet as a tool for communication and recruitment? What is its role in identity-building within radical right-wing groups and how do they use the Internet to set their agenda, build contacts, spread their ideology and encourage mobilization? This important contribution to the field of Internet politics adopts a social movement perspective to address and examine these important questions. Conducting a comparative content analysis of more than 500 extreme right organizational web sites from France, Germany, Italy, Spain, the United Kingdom and the United States, it offers an overview of the Internet communication activities of these groups and systematically maps and analyses the links and structure of the virtual communities of the extreme right. Based on reports from the daily press the book presents a protest event analysis of right wing groups’ mobilisation and action strategies, relating them to their online practices. In doing so it exposes the new challenges and opportunities the Internet presents to the groups themselves and the societies in which they exist.

’Social movement studies have rarely addressed right-wing extremism and, conversely, research on the radical right has rarely located it within a social movement perspective. With its systematic cross-country comparison and focus on networks, this volume constitutes a very valuable exception. Theoretically innovative and empirically sound it demonstrates how much there is to gain by bridging insights from the two fields.’ Donatella della Porta, European University Institute, Italy ’A lot has been said and written about the galaxy of extreme right groups in Western democracies, and their relation to the Internet. Caiani and Parenti shift the conversation from anecdote and speculation to systematic empirical analysis. Drawing upon dominant paradigms in social movement research, and carefully exploring both online networks and offline activism, the authors have produced a text that will appeal not only to those focusing on the extreme right, but to all those interested in the relationship between militancy and communication technology at large.’ Mario Diani, Universitat Pompeu Fabra Barcelona, Spain, and University of Trento, Italy ’This book is a major contribution to the study of right-wing political parties and movements and their use of modern technologies. Scholars of political science in general, and in the field of Computer-Mediated Communication and Information Communication Technologies studies will find an intriguing analysis of the relation between political organizations and the Internet. The well written, original and thought provoking volume sets a high standard for the analysis of the interplay between online� and offline� reality.’ Johannes Pollak, Institute for Political Science & Webster University Vienna, Austria ’Practitioners and scholars have highlighted the threat posed by political extremists using the Internet to further their objectives. These conclusions are mostly based upon speculation. Conversely, this fascinati

Caiani Manuela is Assistant Professor at the IHS (Institute for Advanced studies) of Wien and Marie Curie Fellow at the URCJ (University Rey Juan Carlos) of Madrid. Linda Parenti obtained her PhD at the University of Florence in political Science and is currently research assistant (’stipendiat’) at the IHS of Wien.