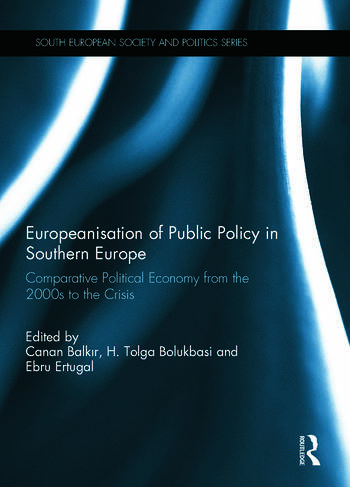 Europeanisation of Public Policy in Southern Europe: Comparative Political Economy from the 2000s to the Crisis

Large or small, old EU member or new, and even EU member state or not – political economies across Southern Europe have been increasingly but distinctively ‘Europeanised’. In political, public and scholarly debates on processes of Europeanisation, Southern Europe invariably features as the area of concern. These concerns have been all the more heightened when the current sovereign debt crisis disproportionately hit this ‘flaky fringe’.

This volume systematically investigates the dynamics of Europeanisation in the ‘Southern Periphery’ by tracing the domestic constellations of ideas, interests and institutions over the course of the 2000s which came to a close with the crisis. Bringing together a multidisciplinary team of leading specialists, the volume focuses on the political economy of public policy reform in Greece, Italy, Malta, Portugal, Spain and Turkey. In order to allow for cross-case comparisons, these original country studies follow a common template framed by what the Editors call the ‘Europeanisation as research programme’. The volume casts empirical light on the causes of the crisis in these cases as well as the past legacies conditioning their responses to the crisis. Its conclusions point to variegated patterns of Europeanisation in different policy areas across Southern Europe.

This volume will be of interest to students and scholars of European integration, European political economy, European public policy and comparative politics as well as specialists of Southern Europe.

Canan Balkir is Jean Monnet Chair in European Economic Integration and Professor of Economics in the Department of EU Studies at Dokuz Eylul University. Her current research interests include knowledge transfer in innovation networks, economics of international retirement migration, and EU–Turkey trade issues. Her publications include International Economic Integration: Theory, Policy and Practice – EU and Others (Bilgi University Publications, 2010), ‘Turkey, the new destination for international retirement migration’ (with B. Kirkulak) in Migration and Mobility in Europe: Trends, Patterns and Control, edited by H. Fassmann, M. Haller and D. Lane (Edward Elgar, 2009), and ‘Economics and the politicisation of civil society: the Turkish-Cypriot case’ (with G. Yalman) in Cyprus: A Conflict at the Crossroads, edited by N. Tocci and T. Diez (Manchester University Press, 2009).

H. Tolga Bolukbasi is Assistant Professor of Political Science and Public Administration at Bilkent University. His current research interests include political economy of economic policy choice, new institutionalisms, Europeanisation of socio-economic governance in Turkey and elite attitudes in Turkey towards EU–Turkey relations. His publications include ‘Political economy’ in Routledge Handbook of Modern Turkey (2012), edited by M. Heper and S. Sayari, ‘Of context, interaction and temporality: historical institutionalism and Turkey’s approach to the ENP and the UfM’ (with S. Ozcurumez) in Comparative European Politics (2011) and ‘On consensus, constraint, and choice: economic and monetary integration and Europe’s welfare states’ in Journal of European Public Policy (2009).

is currently visiting researcher at Bilkent University. She was formerly Jean Monnet Chair in European Integration Studies and assistant professor in international relations and the EU at Izmir University of Economics. Her current research interests include comparative regional policy and governance, Europeanisa-tion of public policies and Turkey–EU relations. Her publications include ‘Europeanization and institutional change: explaining regional policy reforms in Turkey’ in Policy and Politics (2011), ‘Europeanization and multi-level governance in Turkey’ in Southeast European and Black Sea Studies (2010) and ‘Dynamics of regionalisation and the impact of the EU: comparing regional reforms in Romania and Turkey’(with A. M. Dobre) in Europe–Asia Studies (2011).