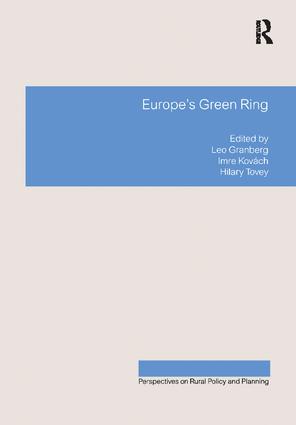 Around the fringe of Europe lies a green ring of countries which have followed different pathways into modernity from the industrial core of the continent and have, until recently, been characterized by a strong agrarian presence in their politics, economy and culture. This book brings together case studies from both the post-socialist countries and EU member states which make up the green ring to compare experiences of rural and agricultural groups. It provides a fascinating opportunity to identify similarities and contrasts in the ways in which these countries have managed their rural areas when faced with the challenges set by industrialization, political integration and globalization. The book focuses on agrarian transformation as de- (and sometimes re-) peasantization - referring to the changing economic, social, cultural and political positions of farmers and food production workers. It also problematizes the standard rural models and opens up discussion of the problems these models pose for the farmers of the green ring countries.

’Beyond analysing the changing role of agriculture and the future prospects of the farming sector, the book provides valuable insights into the history and antecedents of peasant societies in diverse European countries…The result is a thought-provoking study about the shifting rural environment in Europe, which may serve both as a challenge and guide to scholars, planners and policy-makers.’ Journal of Rural Cooperation ’…this book is well produced…it makes an extremely valuable contribution to the rural debate in contemporary Europe.’ Geography

This well-established series offers a forum for the discussion and debate of the often conflicting needs of rural communities and how best they might be served. Offering a range of high-quality research monographs and edited volumes, the titles in the series explore topics directly related to planning strategy and the implementation of policy in the countryside. Global in scope, contributions include theoretical treatments as well as empirical studies from around the world and tackle issues such as rural development, agriculture, governance, age and gender.