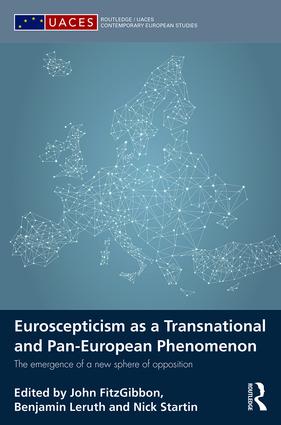 Euroscepticism as a Transnational and Pan-European Phenomenon

The Emergence of a New Sphere of Opposition, 1st Edition

As the EU enters an increasingly uncertain phase after the 2016 Brexit referendum, Euroscepticism continues to become an increasingly embedded phenomenon within party systems, non-party groups and within the media. Yet, academic literature has paid little attention to the emergence of, and increased development of, transnational and pan-European networks of EU opposition. As the ‘gap’ between Europe’s mainstream political elites and an increasingly sceptical public has widened, pan-European spheres of opposition towards the EU have developed and evolved.

The volume sets out to explain how such an innately contradictory phenomenon as transnational Euroscepticism has emerged. It draws on a variety of perspectives and case studies in a number of spheres – the European Parliament, political parties, the media, civil society and public opinion. Examining to what extent the pan-European dimension of Euroscepticism is becoming increasingly influential, it argues that opposition to European integration has for too long been viewed somewhat narrowly, through the paradigm of national party politics.

This text will be of key interest to scholars, students and professionals in EU politics, European studies, political parties, and more broadly to comparative politics and international relations.

"This important new collection pushes forward our understanding of Euroscepticism by extending the range of study to new domains in innovative ways. Taken together, the contributions to this volume mark out new empirical and conceptual territories. This is the first work to deal with this most international of phenomena by properly considering its trans-national and pan-European characteristics. This book will become an essential component in the full understanding of Euroscepticism." - Paul Taggart, University of Sussex, UK.

"This tightly edited and well-organized volume makes a sustained case for why Euroscepticism is no mere marginal phenomenon in European politics. Euroscepticism is not just central to European integration it is trans-national in nature and organization too. It is sometimes said that edited volumes do not advance theoretical understandings. This is emphatically not the case with this volume that breaks exciting new conceptual ground." - Ben Wellings, Monash University, Australia.

3. To Cooperate or Not To Cooperate? The European Radical Right and Pan-European Cooperation

4. Is ‘Eurorealism’ the New ‘Euroscepticism’? Modern Conservatism, the European Conservatives and Reformists and European Integration

7. ‘Stop TTIP’: Towards a Transnational Eurosceptic Opposing the Transatlantic Trade and Investment Partnership?

8. Transnational Euroscepticism as Ideational Solidarity? The 'No' Campaign in the Irish Referendums on the Lisbon Treaty’

9. Eurosceptic Candidate MEPs in the News: A Transnational Perspective

10. Religion and the EU: A Commitment Under Stress

Benjamin Leruth is a Research Associate at the University of Kent, UK. His research focuses on Euroscepticism, differentiated integration in the European Union and public attitudes. He is currently co-editing the forthcoming Routledge Handbook of Euroscepticism and is also working on a forthcoming book entitled The Pirate Parties across Europe.

Nick Startin is a Senior Lecturer in French and European Politics whose research focuses on Euroscepticism and the Far Right in contemporary Europe. He co-founded the UACES research network on Euroscepticism and has in recent years been the co-editor for two prominent, special issues on the topic: the Journal of Common Market Studies (2013) and the International Political Science Review (2015). He is currently co-editing the forthcoming Routledge Handbook of Euroscepticism as well as researching and participating in events related to the 2016 referendum on UK membership of the EU.