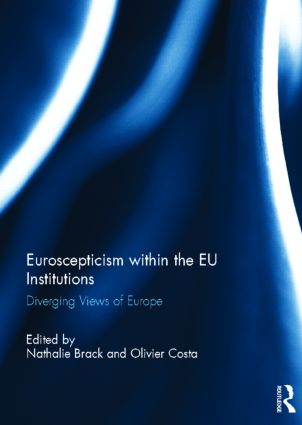 Euroscepticism within the EU Institutions

Since its origins, there have been competing views concerning the nature, scope and objectives of the process of integration and of the European Union. Attitudes towards Europe and European integration, both among political elites and citizens, have been much studied over the last 15 years. But there is no comprehensive analysis of these competing views of Europe at the supranational level.

The existence of radically diverging views on the European political system within the EU’s own institutions is problematic at both theoretical and practical levels. Little is known, however, about this phenomenon, its impact on the EU’s agenda and policy-making as well as on constitutional reform. This book aims therefore at investigating the divergence in views about the European Union in order to lend insight into its consequences for the functioning of the EU and its institutions. It will focus on the main EU institutions, i.e. the Council, Commission, Parliament and Court but will also deal with the visions of various European elites on the EU.

This book was originally published as a special issue of Journal of European Integration.

1. Introduction: Beyond the pro/anti-Europe divide: Diverging views of Europe within EU institutions Nathalie Brack and Olivier Costa 2. Intergovernmentalists in the Commission Renaud Dehousse and Andrew Thompson 3. Eurosceptics in the rotating Presidency’s chair: too much ado about nothing? Cecile Leconte 4. Eurosceptic Members of the European Parliament: Between Exit and Voice? Nathalie Brack 5. European Elites’ Diverging visions of the European Union: Diverging differently since the Economic Crisis and the Arab Spring? Vivien Schmidt 6. Euroscepticism and the European Court of Justice Caroline Naômé 7. Conclusion: the limits of European Integration Juan Diez Medrano

Olivier Costa is CNRS Senior Research Fellow at the Centre Emile Durkheim (Sciences Po Bordeaux). He is also Visiting Professor of EU studies at the College of Europe (Bruges, Belgium), the Institute for European Studies of the Université libre de Bruxelles and the European Institute of the University of Geneva. His priorities in research include European Parliament, comparative legislative politics, EU policy-making and policies, national laws Europeanization.