Evangelicalism, Piety and Politics
The Selected Writings of W.R. Ward 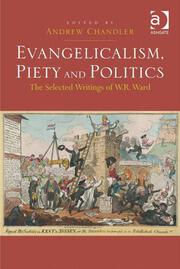 Evangelicalism, Piety and Politics: The Selected Writings of W.R. Ward

W.R. Ward was one of the most influential historians of modern religion to be found at work in Britain during the twentieth century. Across fifty years his writings provoked a major reconsideration by historians of the significance of religion in society and its importance in the contexts of political, cultural and intellectual life. Ward was, above all, an international scholar who did much to repudiate any settled understanding that religious history existed in merely national categories. In particular, he showed how much British and American religion owed to the insights of Continental European thought and experience. This book presents many of Ward’s most important articles and gives a picture of the character, and extraordinary breadth, of his work. Embracing studies of John Wesley and the development of Methodism at large, the ambitions of Evangelicals in an age of international mission, the place of mysticism in evolution of Protestantism and the relations of churches and secular powers in the twentieth century, Andrew Chandler concludes that it was in such scholarship that Ward 'quietly recast the picture that we have of the past and drew our attention towards a far greater, more difficult and more interesting, landscape.'

Contents: Introduction: W.R. Ward and the study of modern religious history in Britain in the later 20th century. Part I The Realm of the Imagination: The making of the evangelical mind (2004); Mysticism and revival: Gerhard Tersteegen (1993); Art and science: or J.S. Bach as an expositor of the Bible (1990). Part II Piety and Practice: Establishments, Denominations and Movements: Power and piety: the origins of religious revival in the early 18th century (1980); The religion of the people and the problem of control (1971); Swedenborgianism: heresy, schism or religious protest? (1972); Established churches, free churches and religious communities in their contemporary social setting (1995). Part III Inheritances and Accommodations: Putting off the apocalypse: evangelical identity and the origins of overseas missions (2003); The legacy of John Wesley: the pastoral office in Britain and America (1973); Is martyrdom mandatory? The case of Gottfried Arnold (1993); The socialist commitment in Karl Barth (1978); Inheriting Dietrich Bonhoeffer (2001); British Methodism between clericalisation and secularisation, 1932-99 (2000). The historical writings of William Reginald Ward 1947-2012; Index.

Andrew Chandler is Director of the George Bell Institute and Reader in Modern History at the University of Chichester.