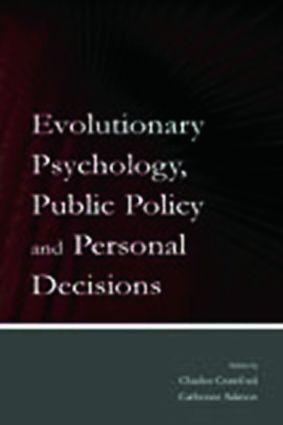 During the last 15 years, human sociobiology has metamorphosed into evolutionary psychology. It is concerned with the social problems and stresses hominid and primate ancestors encountered, the psychological mechanisms natural selection shaped to deal with these stresses, and the way those ancient mechanisms work now. Evolutionary psychologists are making great progress in expanding the understanding of human nature, however, this knowledge has had little impact on policymakers and legislators. Supreme Court justices and managers seldom consult evolutionary psychologists to help with their deliberations. When faced with private decisions few individuals ask themselves how a Darwinian perspective might help them. This volume's aim is to start the process of using theory and findings of evolutionary psychology to help make the world a better place to live.

This book takes evolutionary psychology explicitly into applied areas in a way no other book has. It includes a reasonable scope of applications from pornography to psychopaths and from morality to sex differences in the workplace. An applications section provides concrete ideas for dealing with social and policy issues, including chapters on women in the workplace, rape, and child support. Providing good coverage of basic issues and theory of the field, this book gives lay people and law/policymakers appropriate background to fully understand the applications chapters. Part II provides information on basic psychological mechanisms for group living--including chapters on emotions, reciprocity and legal reasoning, and self deception--that impact on how well public policy and law function. The material in the first two sections provide an intellectual basis for the chapters in the third part of the book which deals with the application of evolutionary psychology to a variety of substantive areas related to public policy and personal decisions. A political scientist concludes the book with a commentary on evolutionary psychology and public policy.