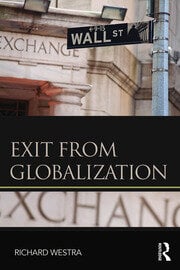 Exit from Globalization moves from theory to practice: from questions of where incorrigible knowledge of substantive economic life derives and how that knowledge is put towards making a progressive, redistributive, eco-sustainable future of human flourishing.

Westra discards at the outset views that the root of current economic ills is the old devil we know, capitalism. Rather, he maintains the neoliberal decades spawned a "Merchant of Venice" economic excrescence bent upon expropriation and rent seeking which will scrape all the flesh from the bones of humanity if not stopped dead in its tracks. En route to providing a viable design for the human future in line with transformatory demands of socialists and Greens, Westra exorcizes both Soviet demons and ghosts of neoliberal ideologues past which lent support to the position that there is no alternative to "the market".

Exit from Globalization shows in a clear and compelling fashion that while debates over the possibility of another, potentially socialist, world swirl around this or that grand society-wide scheme, the fact is that creative future directed thinking has at its disposal several economic principles that transformatory actors may choose from and combine in various ways to remake human economic life. The book concludes with an examination of the various social constituencies currently supporting radical change and explores the narrowing pathways to bring change about.

1. Introduction: From the Merchant of Venice Economy  2. The Zero of Social Change  3. Weighs Like a Nightmare on the Brains of the Living  4. Green Dawn  5. Neoclassical Rapture in Jurassic Park  6. The Institutional Matrix of Heterogeneous Economic Life  7. Conclusion: A Road to the Eco-Kingdom of Freedom

Richard Westra received his PhD from Queen’s University, Canada. His current appointment is Designated Professor at the Graduate School of Law, Nagoya University, Japan. Among his numerous international publications he authored The Evil Axis of Finance, Clarity Press, 2012 and co-edited The Future of Capitalism After the Financial Crisis, Routledge, 2015. 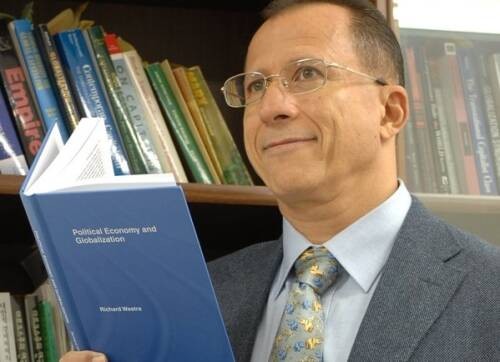 "Exit From Globalization is a thoughtful, challenging book about the nature of the world we live in and both the possibilities and practicalities of achieving progressive, redistributive, eco-sustainable social change.  Insisting on the importance of theoretical clarity, Richard Westra builds on Marx’s economic theorizing of capital to demonstrate the ways in which globalization and financialization have led to the exhaustion of capitalism as well as new opportunities for remaking human economic life. Readers will greatly benefit from Westra’s wide-ranging critical engagement with left and green progressive scholars and his careful presentation of the core principles necessary to guide our creation of a socialism based on human flourishing." —Martin Hart-Landsberg, Professor of Economics, Lewis and Clark College, and Author of Capitalist Globalization: Consequences, Resistance, and Alternatives

"This extremely stimulating book will leave readers disgusted and hopeful in equal measure. Disgust at the degeneration of capital, a debt-fueled machine for predatory rent extraction utterly indifferent to the environmental degradation it wreaks; hope from knowing that a superior alternative to the reign of capital is not only possible, but can be sketched in general outline. I know of no better book on these important themes, or any that better manifests how a deep understanding of Marx can deepen the understanding of our historical moment." — Tony Smith, Professor of Philosophy, Iowa State University and author of Globalisation: A Systematic Marxian Account

"Richard Westra’s book...is an original and powerful contribution to our need for books that creatively think about a global capitalism...[G]iven the seriousness of the crises we face and have been facing for well over twenty-five years, I am surprised that there appears to be such a paucity of writings dealing with the future and the deepening of these crises. It is as if the future were so bleak that people do not want to even think about it. Westra has the courage not to mince words and to argue for truths as he sees them. In this historical context, his book is particularly important and may stimulate a much fuller and more open debate around the considerations of human flourishing in the future..." — Robert Albritton is Professor Emeritus of Political Science, York University, Canada and Author of Let them Eat Junk and Economics Transformed

"Richard Westra’s Exit from Globalization convincingly demonstrates the fruitfulness of the Unoist approach to the comprehension of capitalism in theory and in its stages of historical development and subsequent unravelling and shows that vibrantly democratic eco-socialisms are still practicable even as we confront a global ecological crisis and the spectre of civilisational collapse. Under such challenging circumstances this book has to be required reading." — John R. Bell, School of Business, Seneca College, Toronto, Canada, Journal of Contemporary Asia