Expansionism
Its Effects on Cuba's Independence 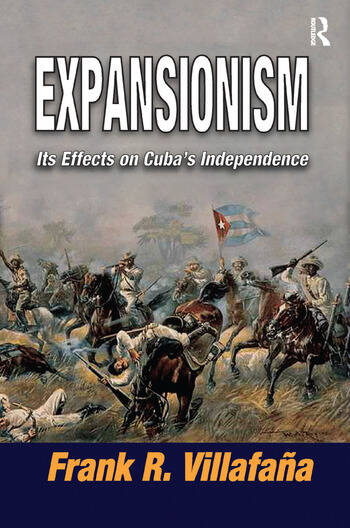 Expansionism: Its Effects on Cuba's Independence

Starting in the early part of the nineteenth century, American administrations expressed a desire to own Cuba. A rationale for adding Cuba to the territory of the United States could be built on Cuba's sugar and tobacco industries, as well as Cuba's mineral deposits. But economics was not the primary motivation. American presidents knew that in the event of war, any nation occupying Cuba would have an advantage over the US military strategies; this fear, coupled with the economic benefit, explains a century of policy decisions.

As Frank R. Villafana shows, Cubans were not sitting idle, waiting for outsiders to liberate them from Spanish oppression. A major part of this research is devoted to studying Cuban efforts to liberate their island from prolonged Spanish domination. Cuba had been struggling for independence from Spain since the 1830s, followed by the Ten Year War. During the 1895-1898 War of Independence, Cuba came close to defeating Spain, but a merciless Spanish military effort converted Cuba into a series of concentration camps.

Spain surrendered after its naval defeats by the US at Manila Bay and Santiago de Cuba, following a failed ground campaign in eastern Cuba. After the US occupied Cuba militarily, American political leaders realized only a small minority of Cubans supported annexation, and the Platt Amendment was developed as a substitute. Today, most Cubans agree that independence, even constrained by the United States, was better than enslavement by the Castro brothers. However, as Villafana emphasizes, Cubans living in Cuba as well as abroad still seek a land free and independent of foreign threat and domestic tyrants.