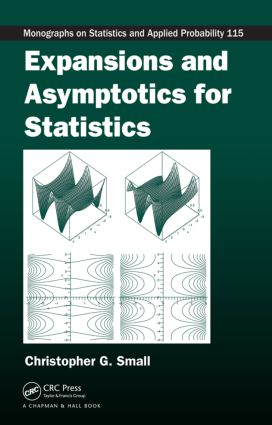 Expansions and Asymptotics for Statistics

Asymptotic methods provide important tools for approximating and analysing functions that arise in probability and statistics. Moreover, the conclusions of asymptotic analysis often supplement the conclusions obtained by numerical methods. Providing a broad toolkit of analytical methods, Expansions and Asymptotics for Statistics shows how asymptotics, when coupled with numerical methods, becomes a powerful way to acquire a deeper understanding of the techniques used in probability and statistics.

The book first discusses the role of expansions and asymptotics in statistics, the basic properties of power series and asymptotic series, and the study of rational approximations to functions. With a focus on asymptotic normality and asymptotic efficiency of standard estimators, it covers various applications, such as the use of the delta method for bias reduction, variance stabilisation, and the construction of normalising transformations, as well as the standard theory derived from the work of R.A. Fisher, H. Cramér, L. Le Cam, and others. The book then examines the close connection between saddle-point approximation and the Laplace method. The final chapter explores series convergence and the acceleration of that convergence.

This book will be an excellent resource for researchers and graduate students who need a deeper understanding of functions arising in probability and statistics than that provided by numerical techniques.

This outstanding book is rich in contents and excellent in readability. … I enjoyed reading this book and found this book valuable in my research as well as in my understanding of expansions and asymptotics as they arise often in statistics. The author has to be commended for his contribution to our profession in getting this book out.

I have found this book very useful not only for the specialists in asymptotics but especially for all those who wish to learn more from this field and to see the inter-relations between different approaches.

This is an excellent book for researchers interested in asymptotics, especially those working on (mathematical) statistics or applied probability. … The book contains a compilation of different techniques to deal with series expansions and approximations with statistical applications. Examples are focused on the approximation of probability densities, distributions and likelihoods.

The role of asymptotics

Padé approximations for the exponential function

A continued fraction for the normal distribution

Approximating transforms and other integrals

The Delta Method and Its Extensions

Introduction to the delta method

The delta method for moments

Using the delta method in Maple

The delta method for distributions

The organisation of this chapter

The likelihood function and its properties

The Laplace Approximation and Series

The Stirling series for factorials

Asymptotic bias of the median

Proofs of the main propositions

Integrals with the maximum on the boundary

The principle of stationary phase

Ratios of sums of random variables

The method of Darboux

Applications in probability and statistics

Applications of the Euler–Maclaurin formula

Christopher G. Small is a professor in the Department of Statistics and Actuarial Science at the University of Waterloo in Ontario, Canada.