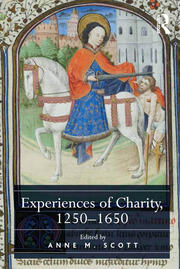 For a number of years scholars who are concerned with issues of poverty and the poor have turned away from the study of charity and poor relief, in order to search for a view of the life of the poor from the point of view of the poor themselves. Great studies have been conducted using a variety of records, resulting in seminal works that have enriched our understanding of pauper experiences and the influence and impact of poverty on societies. If we return our gaze to ’charity’ with the benefit of those studies' questions, approaches, sources and findings, what might we see differently about how charity was experienced as a concept and in practice, at both community and personal levels? In this collection, contributors explore the experience of charity towards the poor, considering it in spiritual, intellectual, emotional, personal, social, cultural and material terms. The approach is a comparative one: across different time periods, nations, and faiths. Contributors pay particular attention to the way faith inflected charity in the different national environments of England and France, as Catholicism and Calvinism became outlawed and/or minority faith positions in these respective nations. They ask how different faith and beliefs defined or shaped the act of charity, and explore whether these changed over time even within one faith. The sources used to answer such questions go beyond the textual as contributors analyse a range of additional sources that include the visual, aural, and material.

Experiences of charity: complex motivations in the charitable endeavour, c. 1100-c. 1650.  Part 1 The Written Record:  From personal charity to centralised poor relief: the evolution of responses to the poor in Paris, c. 1250-1600.  From cure to care: indignation, assistance and leprosy in the high Middle Ages.  More blessed to give and receive: charitable giving in 13th- and early 14th-century Exempla.  A market for charitable performances? Bequests to the poor and their recipients in 15th-century Norwich wills.  The forms and functions of monastic poor relief in late medieval and early 16th-century England.  Changing the practice of charity in 16th-century Norwich: 'the verie nedefull and urgent reformacion'.  In pursuit of charity: Nicolas Houel and his Maison de la Charite chretienne in late 16th-century Paris.  'comme bons citoyens': faith and politics in the poor relief of later 16th-century gap.  From France to England: Huguenot charity in London.  Part 2 The Material Record:  'An ancient box': The Queen v. Robert Wortley and John Allen (1846), or, a history of the English parochial poor box c. 1547.  Hearing the poor: experiencing the sounds of charity in early modern England.  Remembering the poor: signs of charity in late medieval images and texts.

Anne M. Scott is an honorary research fellow in English and Cultural Studies at The University of Western Australia. She has published a monograph, 'Piers Plowman' and the Poor (2004), and edited four volumes of collected essays, most recently with Ashgate Experiences of Poverty in Late Medieval and Early Modern England and France (2012). She is also Editor of Parergon, the journal of the Australian and New Zealand Association for Medieval and Early Modern Studies.