Experiences of Islamophobia
Living with Racism in the Neoliberal Era 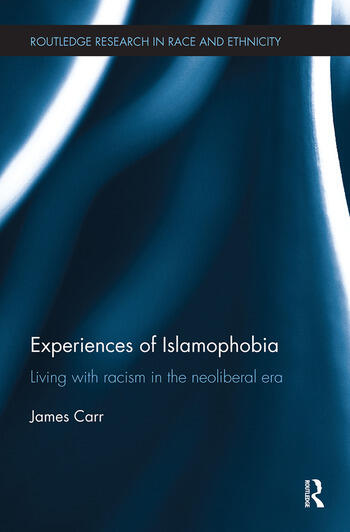 Experiences of Islamophobia: Living with Racism in the Neoliberal Era

Since 9/11 interest in Islamophobia has steadily increased – as has the number of academic publications discussing the phenomenon. However, theoretical expositions have dominated the field. Lived experiences of Islamophobia, by contrast, have received little attention. In recognition of the importance of addressing this imbalance, this book provides theoretically-informed analyses alongside everyday testimonies of anti-Muslim racism, set comparatively in an international context.

Carr argues that the failure of the neoliberal state to collect data on anti-Muslim racism highlights the perpetuation of ‘race’ blindness within governance. Not only does this mean that the salience of racism is denied in the lives of those who experience it, but this also enables the state to absolve itself from challenging the issue and providing the necessary supports to Muslim communities.

Offering original empirical research and theoretical engagement with the concept of ‘race’-blind neoliberal governance, this book will appeal to students and scholars across the social sciences, in addition to policymakers and activists working in this topical area.

James Carr is a post-doctoral researcher in the Department of Sociology, University of Limerick, Ireland.

"James Carr offers a much-needed foray into the lives of Muslims in Ireland as they attempt to negotiate their place in the face of popular Islamophobic racism and the simultaneous state denial of its existence. As Carr himself declares, anti-Muslim racism is both un-researched and un-theorised in the Irish context. Thus, he leads the way in illuminating how Islamophobia plays out at the level of a quintessential neo-liberal state. Far from simply a critique, the book also offers an empirical and theoretical foundation from which to challenge exclusionary sentiments, practices and policies."

"Drawing upon results from his own extensive fieldwork, James Carr provides fascinating new insights into the forms and impacts of anti-Muslim racism in contemporary societies. Utilising international perspectives coupled with a case study of Ireland, his excellent and perceptive analysis of this damaging social phenomenon will be of immense value to students, academics and practitioners alike."

"This text is as timely as it is unique. Deconstructing with clarity the sometimes dichotomous relationship between Islamophobia and anti-Muslim racism, Carr’s study offers a number new critical insights into a still embryonic field of inquiry. While focusing on the Irish context – a geographical area that to date has been somewhat overlooked in existing studies – the analyses underpinning and informing this book have a much wider relevance especially those framed by theories of neoliberalism. Without doubt, this book deserves to be widely read."

"James Carr makes a valuable contribution to the study of Islamophobia by providing unique quantitative and qualitative data in the Irish context. His efforts are a welcome addition to the literature on the prevalence, nature, and causes of Islamophobia across Europe."

'This is a careful and sober contribution that performs a useful re-evaluation of Muslim experience in Ireland. Experiences of Islamophobia: Living with Racism in the Neoliberal Era would, therefore, be of interest to sociologists, anthropologists, and political scientists in Ireland and those concerned with Muslim minority issues in Western Europe. Ultimately, Carr highlights how racism in Ireland is all the more debilitating for not being recognized, and this book is a salutary step in dem-onstrating that in this regard Ireland, alas, is not an exception to Europe.'