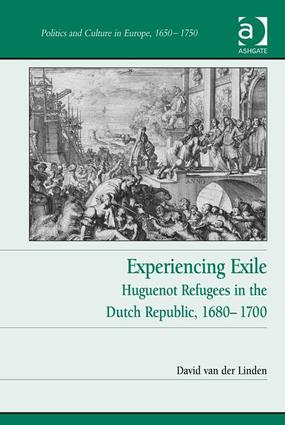 The persecution of the Huguenots in France, followed by the revocation of the Edict of Nantes in 1685, unleashed one of the largest migration waves of early modern Europe. Focusing on the fate of French Protestants who fled to the Dutch Republic, Experiencing Exile examines how Huguenot refugees dealt with the complex realities of living as strangers abroad, and how they seized upon religion and stories of their own past to comfort them in exile. The book widens the scope of scholarship on the Huguenot Refuge, by looking beyond the beliefs and fortunes of high-profile refugees, to explore the lives of ’ordinary’ exiles. Studies on Huguenots in the Dutch Republic in particular focus almost exclusively on the intellectual achievements of a small group of figures, including Pierre Bayle and the Basnage brothers, whereas the fate of the many refugees who joined them in exile remains unknown. This book puts the masses of Huguenot refugees back into the history of the Refuge, examining how they experienced leaving France and building a new life in the Dutch Republic. Divided into three sections - ’The Economy of Exile’, ’Faith in Exile’ and ’Memories in Exile’ - the book argues that the Huguenot exile experience was far more complicated than has often been assumed. Scholars have treated Huguenot refugees either as religious heroes, as successful migrants, or as modern philosophers, while ignoring the many challenges that exile presented. As this book demonstrates, Huguenots in the Dutch Republic discovered that being a religious refugee in early modern Europe was above all a complex and profoundly unsettling experience, fraught with socio-economic, religious and political challenges, rather than a clear-cut quest for religious freedom.

'This brilliant and long overdue study fills a major gap in our understanding of the Huguenot settlement in the Netherlands as well as of the ways Dutch Huguenot memory gradually took shape following the original migration.' Bertrand Van Ruymbeke, Université Paris 8, France ’Experiencing Exile provides an excellent look into the complexity of the Huguenot experience (p. 2). The author’s work responsibly handles countless sources with the thoroughness that many previous scholars have lacked, and for this, he should be praised. Van der Linden’s brilliant historiographical introduction is a testament to his willingness to reread and re-evaluate traditional sources en route to new interpretations. In well-written prose, van der Linden retells the stories of many relocated Huguenots and incorporates related fields of history into his work such as the history of memory, audience reception, and migration history. Van der Linden should surely be praised for a valuable contribution to Huguenot history and early modern history in general.’ Reviews in History

"This brilliant and long overdue study fills a major gap in our understanding of the Huguenot settlement in the Netherlands as well as of the ways Dutch Huguenot memory gradually took shape following the original migration." Bertrand Van Ruymbeke, Universitat Paris 8

"Van der Linden has put forward an exceptional work that highlights the importance and complexity of the exile experience. … There is a need for more works like Experiencing Exile that treat this traumatic experience seriously before we can even begin to understand accurately the complexity of the phenomena of mass religious migration in the early modern period." Timothy J. Orr, Baylor University, Sixteenth Century Journal

"Van der Linden has done an impressive job in producing this monograph which ably fills an important gap in our knowledge of the Huguenot experience in the Netherlands." Matthew Glozier, The University of Sydney, BMGN/Low Countries Historical Review

"This is a wonderfully nuanced portrait of the Huguenot emigration. A deep appreciation of the complexities of the experience pervades the entire enterprise. … Van der Linden's attentive and perceptive reading of the Refuge contributes immeasurably to our knowledge of a crucial historical development." Raymond A. Mentzer, University of Iowa, Tijdschrift voor Geschiedenis

"A subtle and intelligent attempt to capture the experience of exile … Van der Linden has produced an exquisite peace of scholarship that will speak to a wide range of scholars and will remain relevant to historians of the Refuge and beyond for a long time to come." Marja van der Lugt, Georg-August-Universitat Gottingen, French Studies

"A compelling and persuasive account of the Huguenot exile experience in the Dutch Republic. … This is an exemplary work of research and presentation that will be of great use to scholars of early modern religion, exile, and identity." Christine Kooi, Louisiana State University, H-France Review

"Experiencing Exile is an exemplary study of a seventeenth-century exile community and will be a point of reference for any future exploration in this field." Geert H. Janssen, University of Amsterdam, Journal of Ecclesiastical History

"Van der Linden … raise[s] important questions as he seeks both to refute the heroic legend of the Huguenot Refuge and to explain how this stubborn legend was formed in the first place. We can use more such studies of the experience of exile." Barbara B. Diefendorf, Boston University, French History

"This book is an excellent survey of the key dimensions of the Huguenot experience: survival, legitimisation, memory, and identity." Willem Frijhoff, Erasmus University Rotterdam, Renaissance Quarterly

Focusing on the years between the end of the Thirty Years' War and the end of the War of the Austrian Succession, this series seeks to broaden scholarly knowledge of this crucial period that witnessed the solidification of Europe into centralized nation states and created a recognizably modern political map. Bridging the gap between the early modern period of the Reformation and the eighteenth century of colonial expansion and industrial revolution, these years provide a fascinating era of study in which nationalism, political dogma, economic advantage, scientific development, cultural and artistic interests and strategic concerns began to compete with religion as the driving force of European relations and national foreign policies. The period under investigation, the second half of the seventeenth century and the first half of the eighteenth, corresponds with the decline of Spanish power and the rise of French hegemony that was only to be finally broken following the defeat of Napoleon in 1815. This shifting political power base presented opportunities and dangers for many countries, resulting in numerous alliances between formerly hostile nations attempting to consolidate or increase their international influence, or restrain that of a rival. These contests of power were closely bound up with political, cultural and economic issues: particularly the strains of state building, trade competition, religious tension and toleration, accommodating flows of migrants and refugees, the birth pangs of rival absolutist and representative systems of government, radical structures of credit, and new ways in which wider publics interacted with authority. Despite this being a formative period in the formation of the European landscape, there has been relatively little research on it compared to the earlier Reformation, and the later revolutionary eras. By providing a forum that encourages scholars to engage with the forces that were shaping the continent - either in a particular country, or taking a trans-national or comparative approach - it is hoped a greater understanding of this pivotal era will be forthcoming.