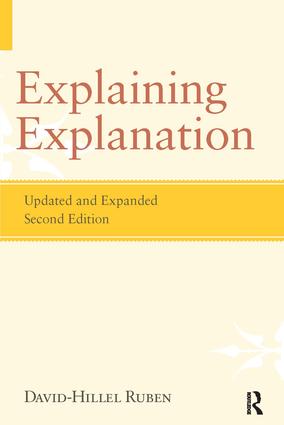 This second edition of David-Hillel Ruben's influential and highly acclaimed book on the philosophy of explanation has been revised and expanded, and the author has made substantial changes in light of the extensive reviews the first edition received. Ruben's views on the place of laws in explanation has been refined and clarified. What is perhaps the central thesis of the book, his realist view of explanation, describing the way in which explanation depends on metaphysics, has been updated and extended and engages with some of the work in this area published since the book's first edition.

“This book offers a splendid critical discussion of philosophical work on explanation . . . of special interest is Ruben’s view of the place of laws in explanation, which has been substantially modified and sharpened in this second edition.”

Reviews from the first edition:

“Explaining Explanation is what many books claim to be, but few actually are—a book that is both accessible to ‘the advanced undergraduate’ and of interest to professional philosophers. It presents a good overview of a wide spectrum of work on explanation with admirable clarity and concision.”

“A thoughtful exploration rather than a manifesto. It shows someone hard at work wrestling with difficult problems and committed to helping others to do the same.”

—Peter Lipton in The British Journal for the Philosophy of Science

“Explaining Explanation contains a great many important and stimulating discussions. . . . I strongly recommend it to anyone with an interest in causation and explanation.”

“The volume succeeds admirably in being accessible to undergraduates and helpful to specialists in the field.”